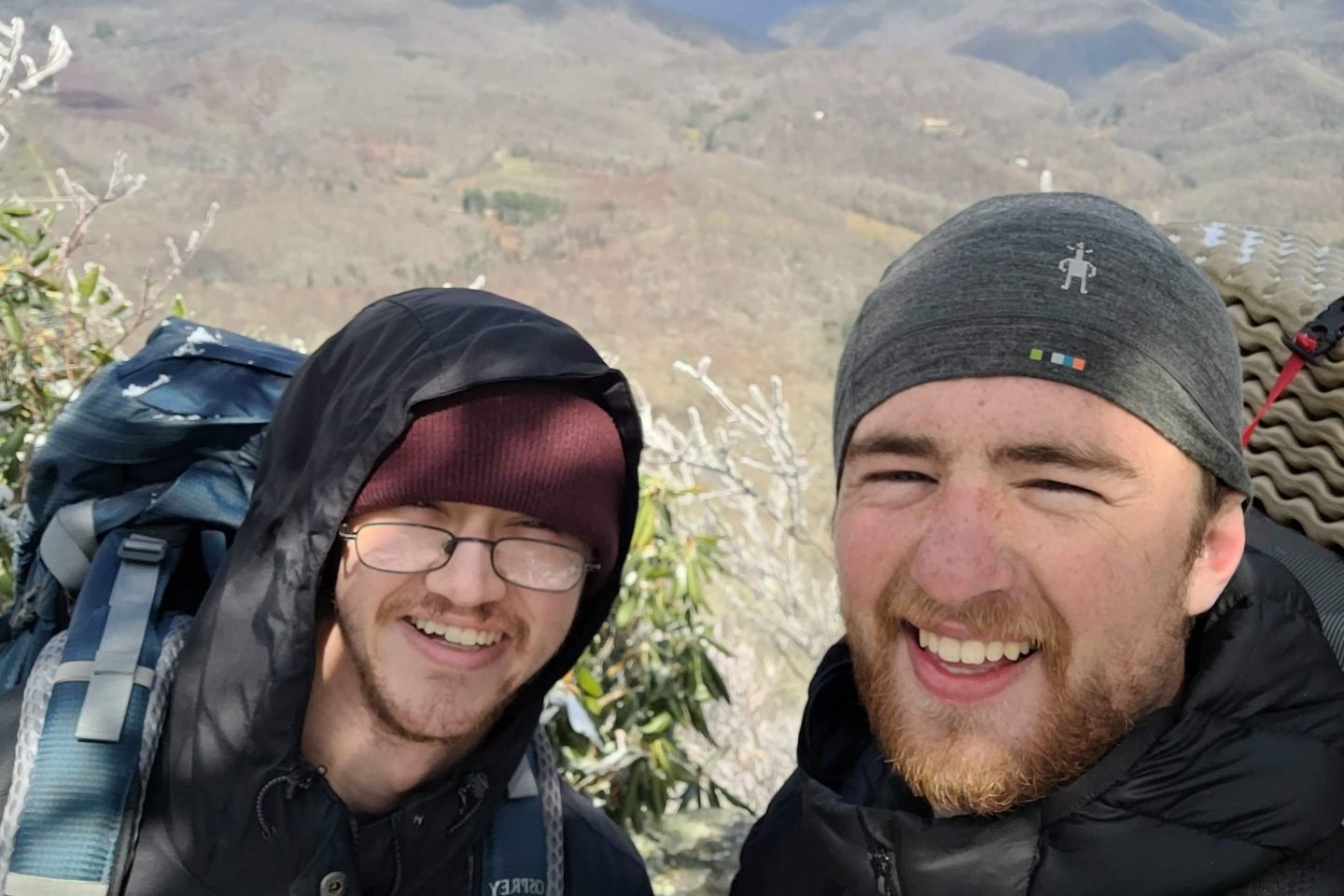 I am zeroing today at mile 395 at a hostel on roan mountain. I got to Erwin, Tennessee Monday morning and zeroed Tuesday at uncle Johnny’s hostel. They were both nice days, I enjoyed the nice weather by sitting outside and drinking beer on both days. I was looking at switching out my tent to one with a rain fly as mine just has a single wall which makes condensation inside the tent an issue at times. I had great luck and found a gem of a tent inside the hiker box, a Nemo hornet one person which just happened to be one of the tents I was looking at online. My friend Ryan came down from Pennsylvania and joined me on Tuesday evening. I hadn’t seen Ryan in three years but after about 15 minutes we were cracking jokes at each other’s expense, it was if we had seen each other last week. I gave him a gear shakedown and threw all the unnecessary gear he had into the hiker box . Going through his gear and explaining backpacking related things to Ryan who is a beginner, made me realize the knowledge and experience I have gained which I haven’t really thought too much about. I also caught up with my trail family on Tuesday as they were staying at the hostel so that was a nice surprise to see them all.

On Ryan’s first day we “slackpacked”, which means leaving our packs at the hostel and having them shuttle us to our starting location. We hiked southbound for twenty miles back to Uncle Johnny’s. It felt weird not having weight on my back as I was hiking, I think I actually prefer the counterweight of a pack as I hike which seems counterintuitive.

The next morning we were shuttled back to the spot we had started from the previous morning. The weather was below freezing and would stay that way all day. It began to snow and Our water filters froze. I gave Ryan my rain gloves to break the wind as he didn’t have any. We decided to do 15 miles to Roan Knob shelter which is the highest shelter on the AT at 6200ft. The shelter has four sides and a door so we figured that would be the best bet despite the elevation. I got to the shelter and it was very cold. Shivering I changed into my camp clothes, pulled out my sleeping pad and climbed into my sleeping bag to warm up. Once I warmed up a little bit I cooked myself dinner, I then began to worry where Ryan was. He eventually showed up and climbed into his sleeping bag and ate dinner. Two more hikers I knew showed up, Deadeye and Hot Hands. The temperature got down to single digits Fahrenheit and was -7 with windchill. It was too cold for anyone to get much sleep. In the morning the thermometer in the shelter read 13 degrees which meant it had to be close to zero with windchill. A hell of a night for Ryan’s first time backpacking. My sleeping bag got wet from the moisture from my breath and was beginning to freeze, our shoes were also frozen. Ryan and I were so cold we decided not to eat breakfast and just get going. Ryan was ready before me so I told him to get going so he could warm up and to avoid frostbite on his feet from the frozen shoes. I packed up the rest of my stuff and wrestled with my frozen shoes in an effort to get them on my feet. I was out the door twenty minutes after Ryan. I could feel the piercing wind as soon as I opened the door, the trail was frozen over, like a luge. A few minutes after I left I could feel my hands getting very cold, but I kept going hoping they would warm up if I kept wiggling my fingers. My glove liners were not enough for this kind of weather. After another few minutes I decided that they were too cold and beginning to sting so I needed to warm them up immediately. I pulled to the side of the trail, took my pack off and put my hand under my armpits. They still wouldn’t warm. I then pulled out my stove and began to boil water. The warmth of the pot on my hands was a relief but only temporary. I swore when I spilt water on my right glove knowing it would freeze. I peeled off my glove and looked and my hand, it was red and discoloured. I was out of the shelter about an hour at this point. I realized when I was my putting my gear away, my hands were still in the same condition and would only worsen if I continued and I could potentially lose fingers to frostbite. I began to panic, and fear kicked in. My emotions began to overwhelm me, I was getting angry at myself for making the decision to camp up this high and for telling Ryan to go ahead of me, if I was having this much difficulty how was a beginner doing in these conditions? I got mad at Ryan for not having his own pair of gloves. “Get a grip Jack” I told myself, “focus now, use your brain dude”. I remembered Hot Hands saying that he had a body warmer, reluctantly I head back up the Icy luge of trail I had just comes down, towards the shelter, leaving my pack on the side of trail. On the way back I could feel my ring finger and pinky on my right hand and the thumb on my left hand becoming stiff. When I arrived at the shelter, I was relieved to see hot hands and deadeye still there. Hot Hands gave me the body warmer that was for your back. It was a slow heating one but Deadeye had thick possum down socks that I used for gloves. Finally my hands began to warm up. I headed back down the trail taking 1 hour and 15 minutes to do 1.4 miles to the nearest road. At the road there was trail magic and the woman had hot chocolate and handwarmers, Ryan had passed before she had gotten there. she let the rest of us sit in her car with the heat on. The trail magic was timely, “the trail provides” as the saying goes. I called a hostel and booked a room for that night for the four of us. The views for the rest of the day were stunning going over the roan highlands, it reminded me of Connemara in the west of Ireland. When I caught up to Ryan later in the day I yelled out “WILSON” doing my best Tom hanks impersonation from Castaway. I told him what had happened in the morning and we were both glad to see each other in one piece.

We got to the hostel that night and had a hot shower, hot food and several pints of Guinness on draft in the bar below the hostel. There were multiple hikers I knew staying there that night so it was great to see them all and share stories from the last several days. It was karaoke night which was a big attraction for the locals, it was a great time drinking, dancing, and singing. We decided to take a zero the next day to rest up. Ryan had done 51 miles in three days on his first three days on the AT, and had made it through bad conditions, he deserved a day off. I had pushed him hard and he had done very well. What he lacked in gear and experience he had made up for with sheer grit.

Today marks one month on trail for me. The next town is Damascus, Virginia seventy five miles from here and we plan to take five days to get there.

Want to document and share your hike with friends and family?
Previous: Mar 27th, 2021

Wow. Jack! I was reading your latest adventure to Amy on our car ride out to Northampton to visit Lucy, and I was getting all choked up. Glad to read you pulled through those harrowing and trying tribulations in one piece. Zero days are good for the mind. I imagine that will be in Damascus soon. I took five zero days at a place called "The Hostile," which had stacks of postcards with this typographical error printed on them. Keep on trekking, Boots! Best, Josh

Oh my sweet Devine ..,, jack ❤️ I nearly fainted reading that. Your poor wee hands. Hopefully your hands and body are ok. I’m so proud of you but it was all very scary. STAY SAFE and keep with someone. I bet your food and pint were gorgeous. Lots and lots of love from Ireland Pauline xxxx

That’s one hell of an update Jack, Thankfully your fingers are ok. Hopefully the weather will improve over the next few weeks. Thanks for all the updates since you started out, its great to hear how you are getting on, where you are and about the people you meet. Joyce x ☘️

Jack Finlay I nearly had a heart attack reading that - a movie or a book will be in the agenda for you !! Mind yourself , stay warm & safe 😘🤗

Jack, if you had made that story up it would have been the most compelling piece of fiction. Absolutely riveting story, really well written..... But it’s NOT fiction, it happened last week - even though you had told me all about it, reading it was very emotional and scary as hell. I can only imagine what must have been going through your mind... And Ryan’s - what a baptism of fire on his first couple of days!! Great learning, kudos to you both for getting through that crazy adversity - I can only imagine how good that night with the Guinness, karaoke and locals must have been 🤣 😂 Keep the stories flowing (maybe less drama!), more pics please.... and keep her lit Boots!!!

Definitely add this one to the book. Glad your fingers didn’t fall off and that you could find some guinness to warm you up hahaha. Stay warm jacky

😱 Holy Mother of God!!! I had to sit down reading that. So well written Jack but so flippin’ scary. Just happy you had the wherewithal to go back to seek help. Keep the lengthy feed coming, so wonderful for us to read but I expect will be great for you to have in years to come. Mumxxx