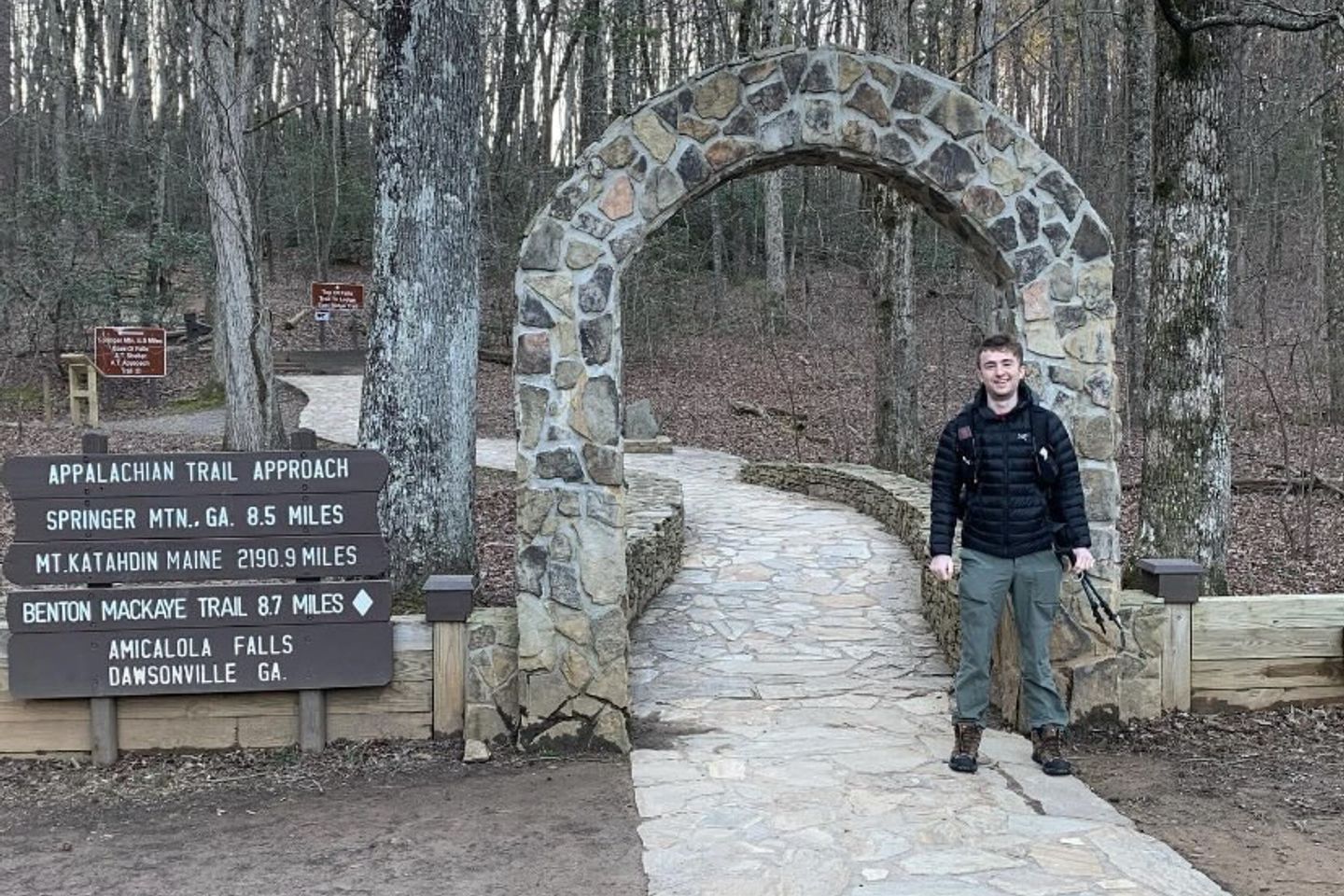 This morning, I had a shuttle driver named Ron pick me up at 630am. I slept through my alarm and woke up 5 minutes beforehand so I was in a rush to pack remaining items in my bag. Ron was full of knowledge about this area of the trail and informed me of bear activity, water sources on the approach trail, and the snakes to look out for. There are two types of venomous snakes on the AT in the south, the copperhead and timber rattlesnake. Ron said it was still too cold for them to be out but if I did see one it would be a timber rattlesnake as they like to bask in the sun on the open trail. If They do bite 70 percent of the time they give a dry bite which means that they release no venom. He said he’s never heard of a hiker being bit around here. He dropped me off at the start of the amicalola approach trail, and took a picture of me at the iconic arch(pictured above). I began hiking at 8am starting at a fast pace completing the 8.5 mile approach trail and just under 3 miles of the Appalachian trail by lunchtime. The approach trail was no joke, at the start of it the trail goes up a Steep ascent of 600 steps of stairs following amicalola falls to the top. It is the tallest water fall in the U.S east of the Mississippi. At springer mountain which is the official starting point, I signed the trail log marking the start of my journey. Around 1 o’clock I stopped for lunch at stover creek shelter. Before eating I laid down and did breathing exercises using the Wim Hof method. I plan to use these exercises every day as a way to meditate. For lunch I had 3 peanut butter sandwiches that I had prepared last night. After eating I resumed hiking, slowing down after lunch and did about 4 1/2 miles to the hawk mountain campsite arriving at 3:30pm, where I set up camp for the night.

Way to go Jack!! Stay in the moment and enjoy every part of it.

My God, this is cooler than you reacting like a video-game character to combination call-outs in the All-Ireland final. And that was cool. Enjoy bro, I’ll be keeping an eye on this!

Thank you all for the support! Much love

Well done Jack sweetheart xxxxx at least you had 5 minutes 😂. Looking forward to hearing from you on this gigantic trail. Lots of love Ardee. Pauline xx

Good Luck on your journey Jack. An experience of a lifetime awaits you. We look forward to following you virtually.

Jack, I enjoyed reading about your first day. The approach trail is brutal. You are lucky that your pack is 25 pounds. Mine was 72. I look forward to catching up with you. Perhaps Henry and I will see you in May. Great start. Take care of your feet. Keep writing and keep going. Enjoy yourself.

Great start Jack! Keep the photos coming too. That was an early start on Day 1, would not have liked that at all😂.