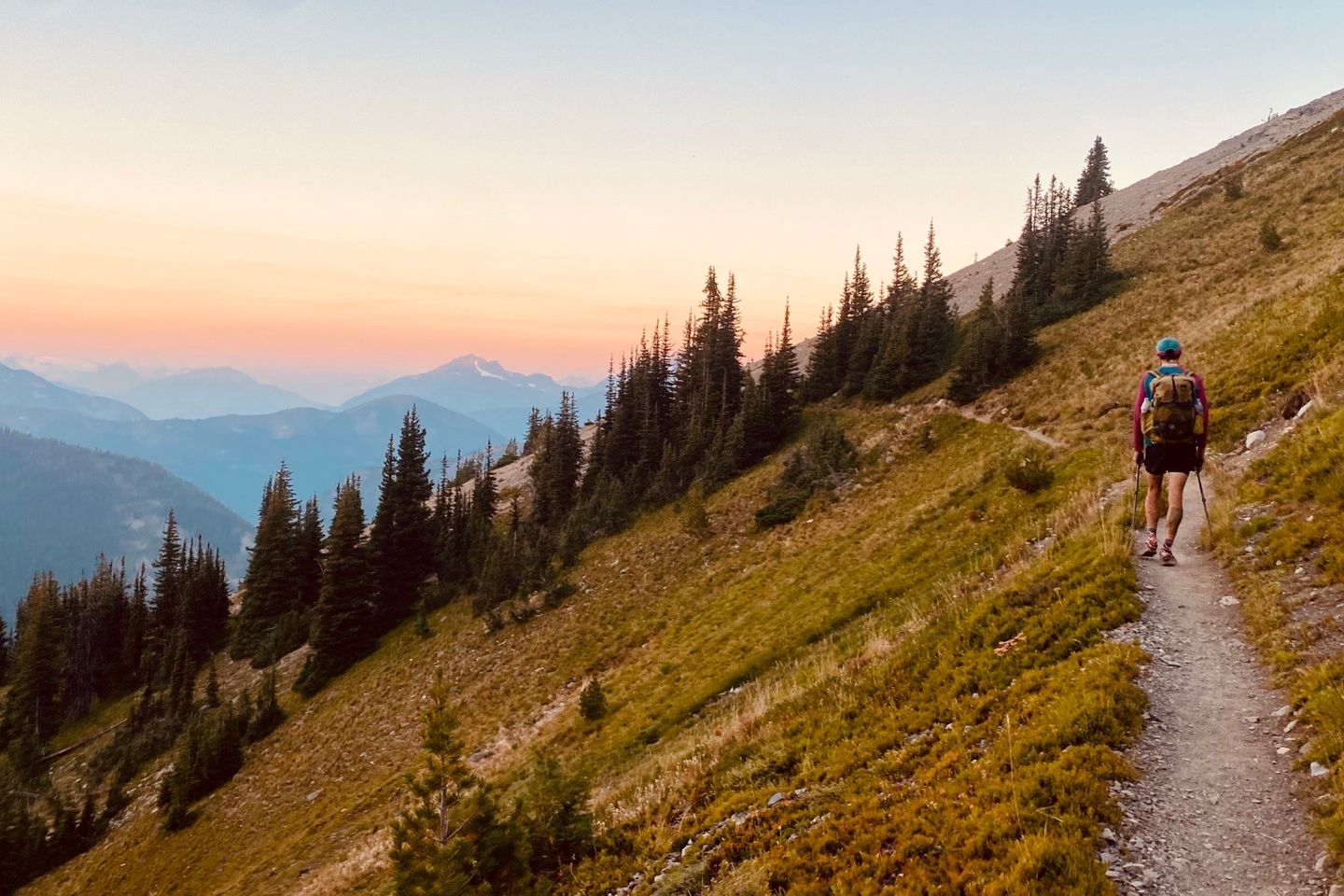 🌟Sorry in advance for the very very long post. Thank you to those who encouraged me to finish this saga with the story of the crazy last day. ✨

By 5:45 we hit the trail. The sun was not up, as we hiked with headlights up to a long traverse. By around 7 am we were passing hikers who had touched the terminus the previous day and were finishing their “victory lap” as they exited out Hart’s pass. The first five hikers we passed were reassuring us that the smoke ahead of us was not bad at all, that we shouldn’t have any problems getting to the end of the trail, and encouraging us to soak in our last day.

At mile 8, we sat for a coffee and breakfast. Mimo, Breaking Bad, Ranger and Tango all caught up to us. By this point, we could all see two clear plumes of smoke exactly in the direction we were hiking. Things did not look good. Change of plans again? Yes. We all heard from another hiker that we should reconsider sleeping at the junction due to the smoke in the valley where the terminus is. So our group decided to meet 8 miles up at a peak before the terminus and reevaluate our plans there once we had a clear view of the trail to the terminus. We all prayed that Shaman would catch up for us to pass along the message.

Over the next 10 miles, Openbook and I passed many friends who were finishing up their victory laps, receiving words of encouragement again and again that we were definitely going to make it, nothing to worry about, the smoke’s not that bad. None of these folks knew that the fires had closed the surrounding exit trails. None had had service for days.

We were moving fast with adrenaline, excitement, and anxiety. By 19 miles in we had passed everyone in our trail family, passing Ranger in the valley below Woody Gap (the top of a climb just before the pass where we had all planned to meet one final time). We broke for lunch with another hiker named Stitch. After 45 minutes of rest and seeing none of our trail family, we decided to leave soon for the pass.

Then, Openbook noticed a cloud to the east that wasn’t there before. We both went to look more closely and saw that it was a brand new plume of smoke rising and changing rapidly, and at the base were red flames greater than tree height engulfing trees as the fire climbed over a ridge and descended the valley towards us and trail. This fire, we knew, was new and bad news.

Stitch told us she saw two rangers just behind her coming our way. We were terrified they were going to tell us to Immediately turn around and crush our dreams of reaching terminus just 11 miles away. We debated leaving our lunch spot to stay ahead of them, but instead we waited. The two rangers had their radios out, but didn’t seem alarmed or anxious. They asked us if we were hiking north or south. We said north, and asked if that fire was bad news. They said they were monitoring it, and that they would probably be closing the trail soon once they got the call. They said they would be hiking north to the terminus to post updates as they went.

When they left, we knew we had one last chance to make it to the end. It took no time at all to decide we had to run for it. We decided we couldn’t wait for our trail family at the pass, we had to get past these rangers and stay past them to finish this, and pray our trail family could do the same.

We ran for three miles up hill to the top of the pass, passing Sticks who said he never saw the rangers pass him, so at some point we had passed them without realizing it. We saw a tent set up and called out to make sure no one was in it. We notified every southbound hiker of the situation with the new fire and the closure, leaving three messages with southbound hikers to let our trail family know we were pushing on to the terminus without waiting and the situation with the rangers.

We fast hiked and ran where we could down the 3000 feet and 8 miles of descent to the end. We passed the lake, deciding not to stop for water, passed the junction where we had planned to camp, where no tents or packs were left by others which seemed odd. We passed 40 or 50 southbound hikers, telling each our quick version of the situation and leaving them all questioning whether they would be able to exit south via Hart’s pass. We wondered the same thing. We were ready to hike out that night the same 30 miles we had hiked in. Anything to reach the end.

When we were 1 mile out we knew we had made it. We jogged into the clearing and touched the statue, laughing, But feeling like I could cry. The stress from the day had increased steadily to the point where I was an emotional wreck; worry we wouldn’t make it, guilt that we left our trail family behind, excitement that we had finally made it to the end, sadness that all our friends behind us wouldn’t be able to have this moment.

The relief was palpable. This moment for me meant the end of so much struggle, pain, perseverance, discomfort, stress, chores, fatigue. It felt like accomplishment, pride, and success. But at the same time, it was so difficult to process my emotions in the moment to know how I was feeling. The end of the trail also meant the end of being the fittest I’ve ever been, having one single goal I was working on day after day, having a very specific structure and routine, eating whatever we wanted, being outside all day every day. And the start of adult responsibilities, actually tackling to do lists that had been racking up with tasks, having to make daily choices about what to wear, what to do, real life chores…

I think feeling conflicted is a pretty common experience at the terminus. So anyway, we touched it then popped the champagne and beer we had hiked in 80 miles since we didn’t know if our trail family would make it in. Then 45 minutes later, sticks made it and told us EVERYONE was going to make it! That’s when our joy really began. As our friends came in we all celebrated and laughed and told our stories from the day. And soon enough, small groups of other hikers who had already begun their southbound exit returned to the terminus.

There were 21 of us when the first helicopter circled above us then flew away. A half hour later, the helicopter came back then started to descend. We had no idea wherher it was the US or Canada, or if they were going to evacuate us or tell us to start hiking back the 30 miles we just came from.

The pilot landed the helicopter probably .25 miles away and bushwhacked to us. He said if we were all going to hike out through Canada, that we should do it soon because there was a fire that spread from the US into Canada that was threatening to close off the trail to Manning Park to the north. The pilot didn’t know about the fire to the south threatening to close trail behind us. We had a few folks ask him questions about whether we were legally granted access into Canada, what would happen if we didn’t have passports, what the status of the southern fire was, what a heli evac would cost, etc. another hiker had pushed their garmin SOS to figure out what the PCTA was recommending we do. We heard the trail behind us had been closed two hours before we reached the terminus (around 2:30). We were somewhat trapped.

The hiker with the garmin heard that the PCTA was recommending that hikers north of the southern fire exit through Canada. We didn’t need much more than that to feel comfortable packing up and heading across the border. Our group decided to camp .2 north at a large Canadian campsite, and to hike out in the morning. Brad, the Canadian Forest Service pilot, had said that we should be fine so long as we got out to Manning Park by noon the following day. All the rest of the hikers decided to hike out that night as far as they could, since it was just 8 more miles.

The following morning, we left at 6:30 am and hiked through dense smoke up and out of the valley and then down to Manning park. I got a headache from the exercise in the smoke. At breakfast we ran into the other two groups and saw the photos they took of the fire in Canada that was close to the trail we hiked out on. They could actively see flames climbing toward the trail hours before we all decided to hike out. We had no idea how close the fire was until after the fact, but still feel unbelievably lucky.

Besides some grief from the US border agent, everything went smoothly getting back to the US. I’m still in shock about this story and feel like I won the lottery. We were two of the last 10 people to touch the terminus this year, and 2 of just 21 hikers who got to skip 20 miles of hiking and hike out to Canada in the last 3 years. I don’t know how much luckier you can get.