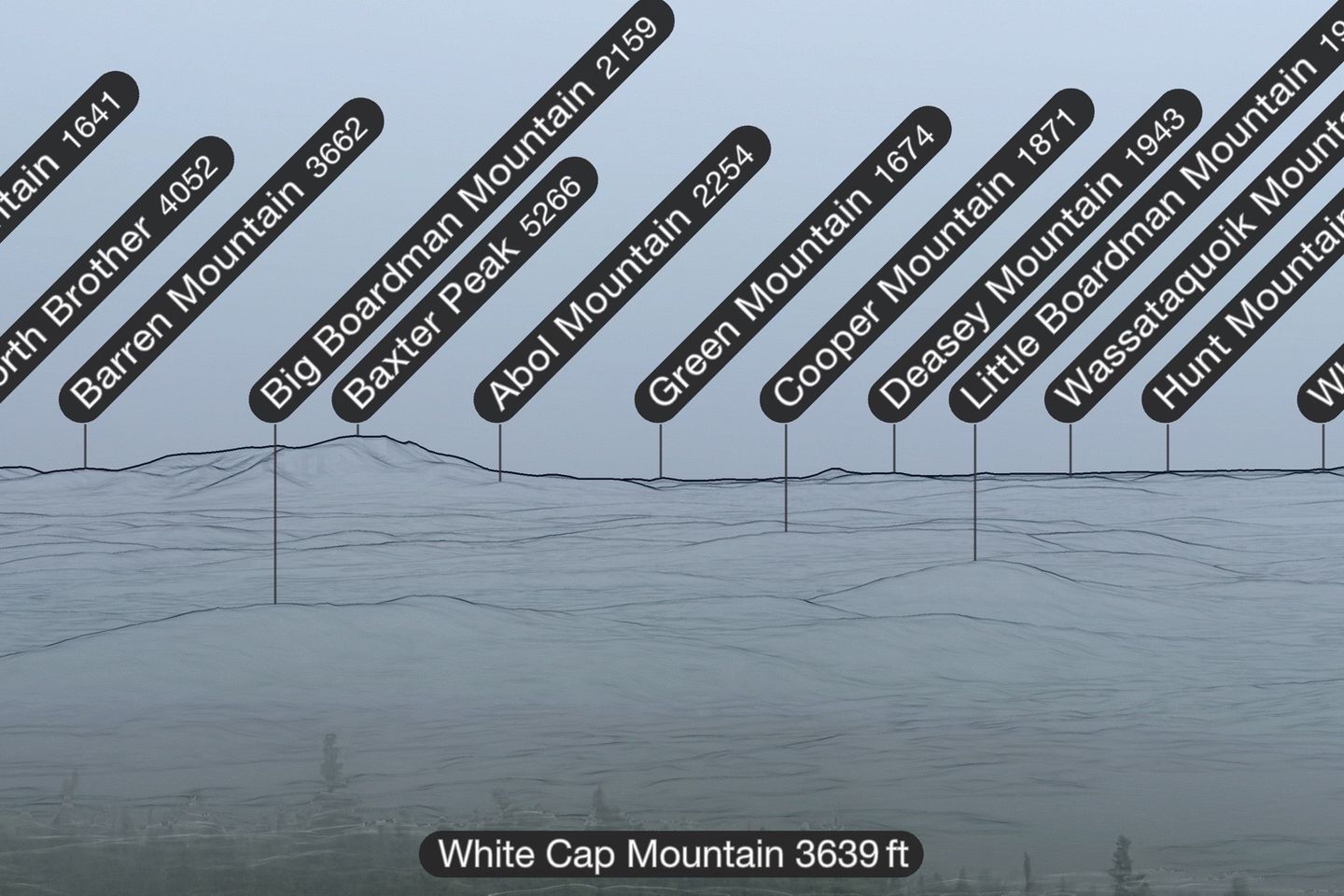 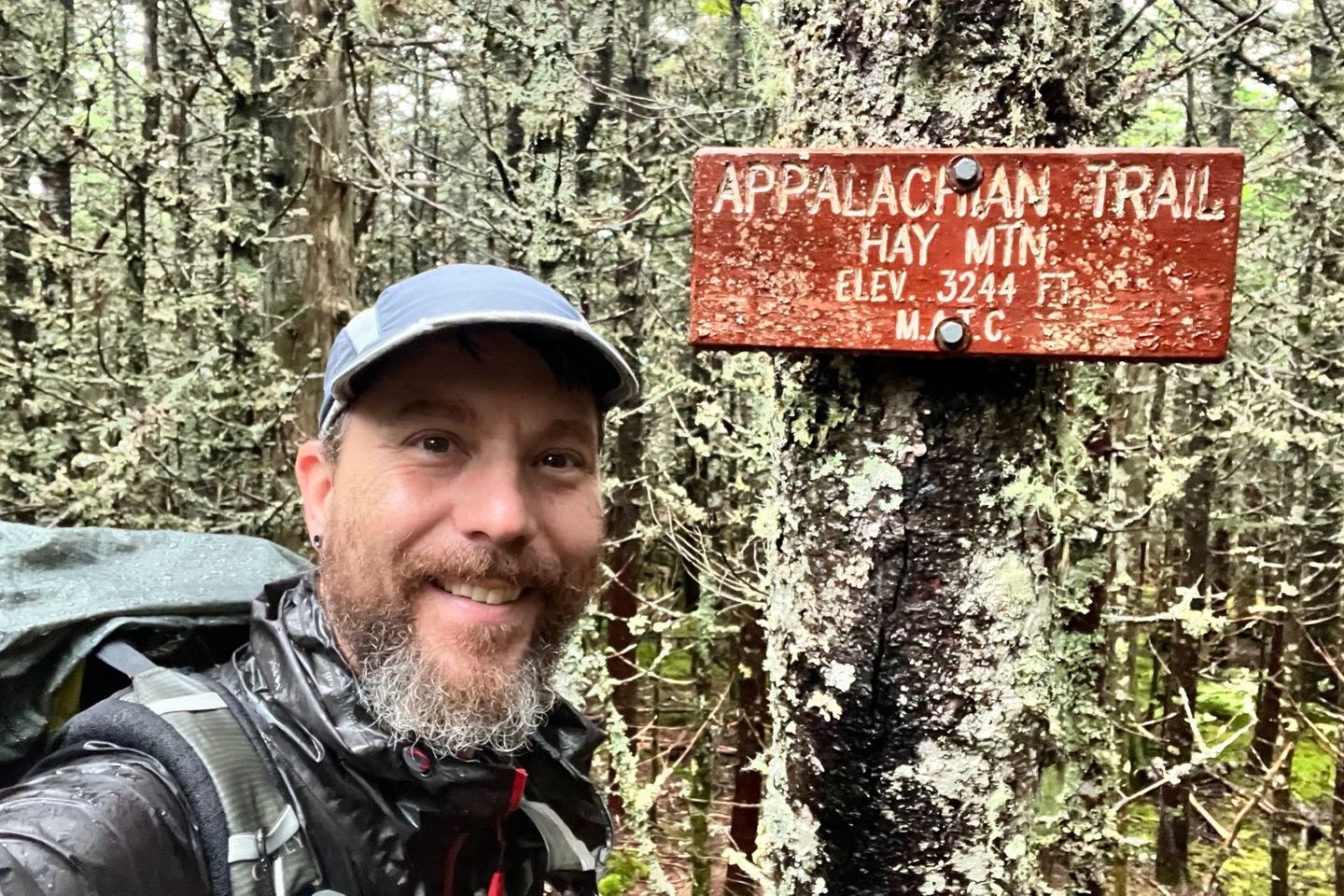 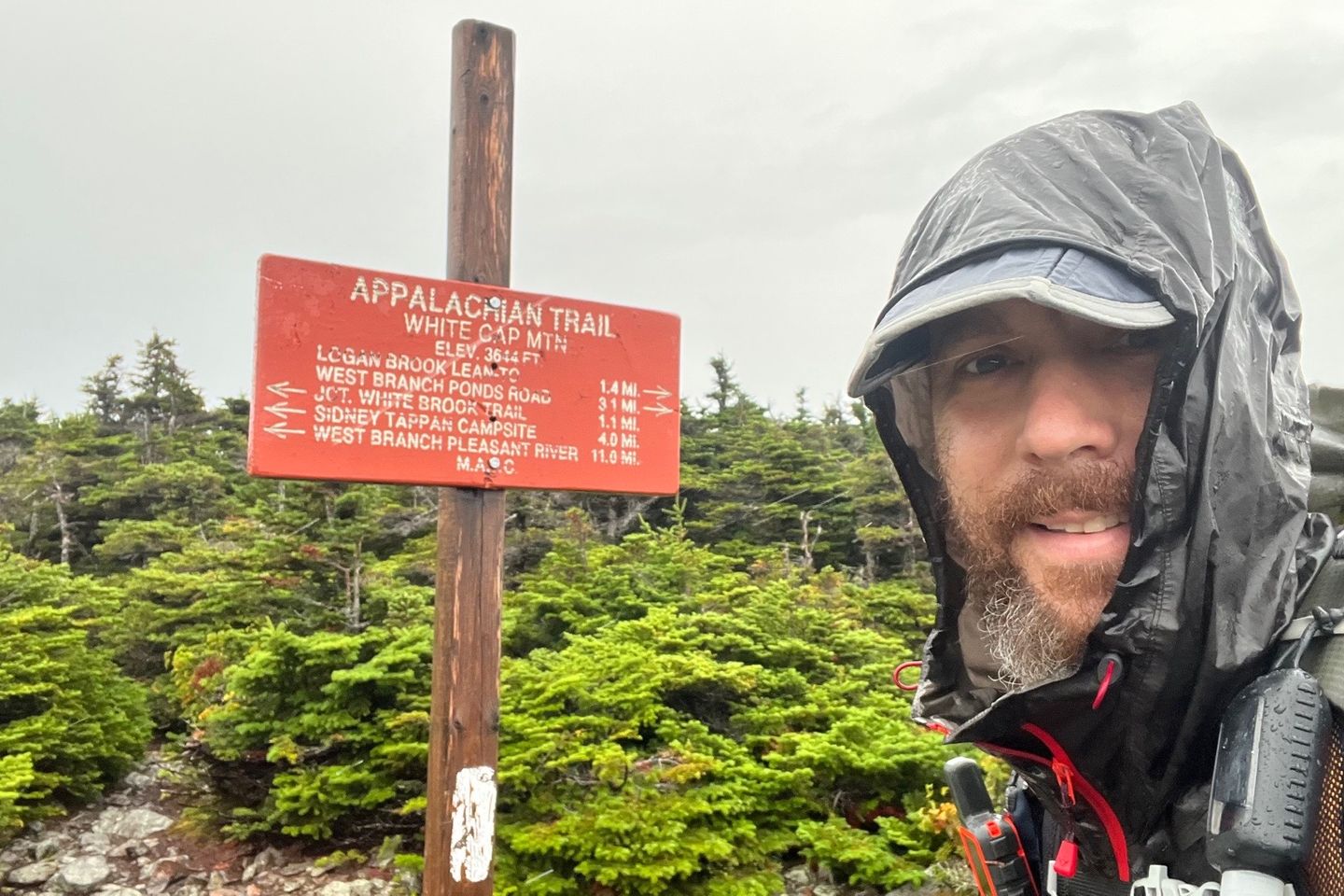 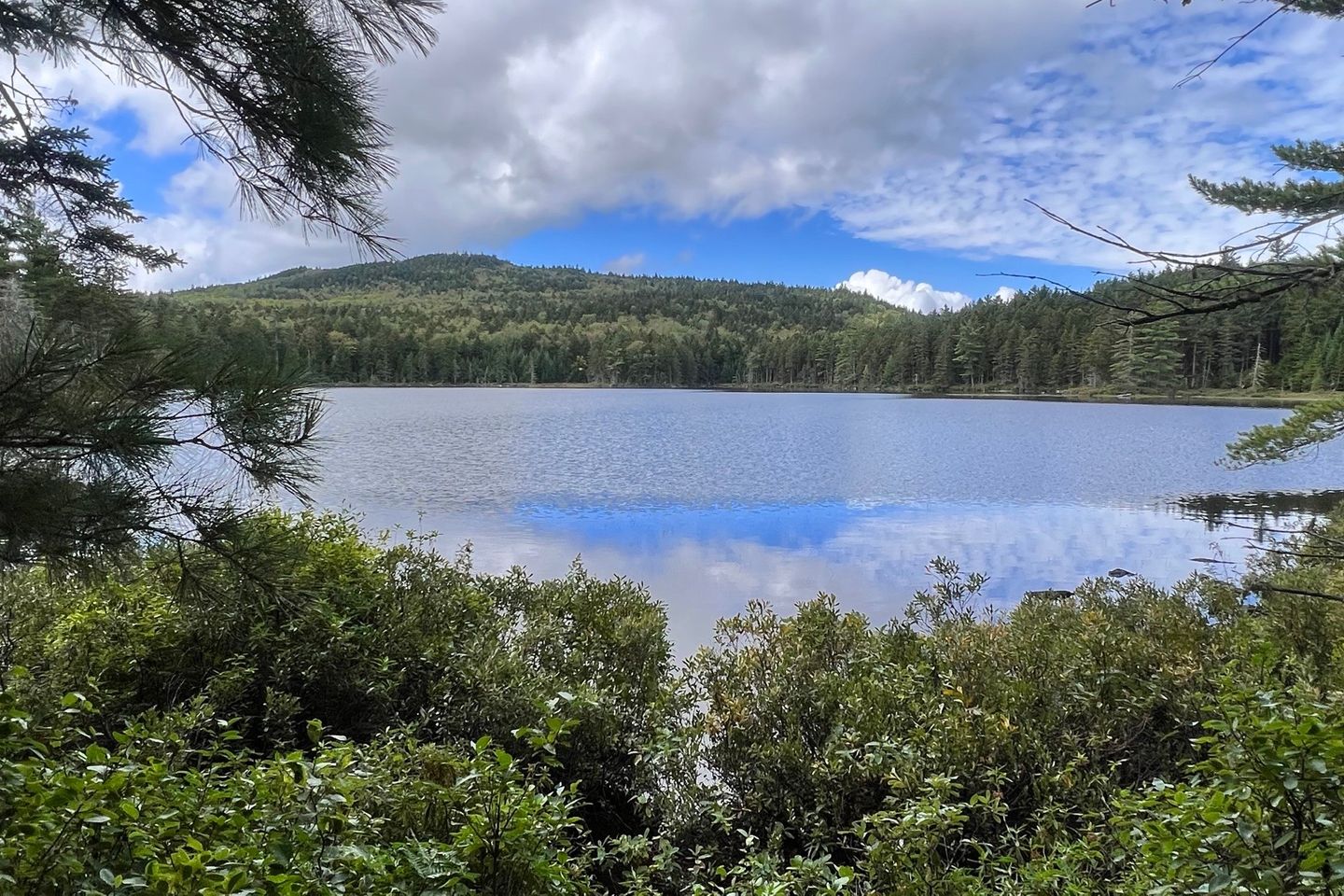 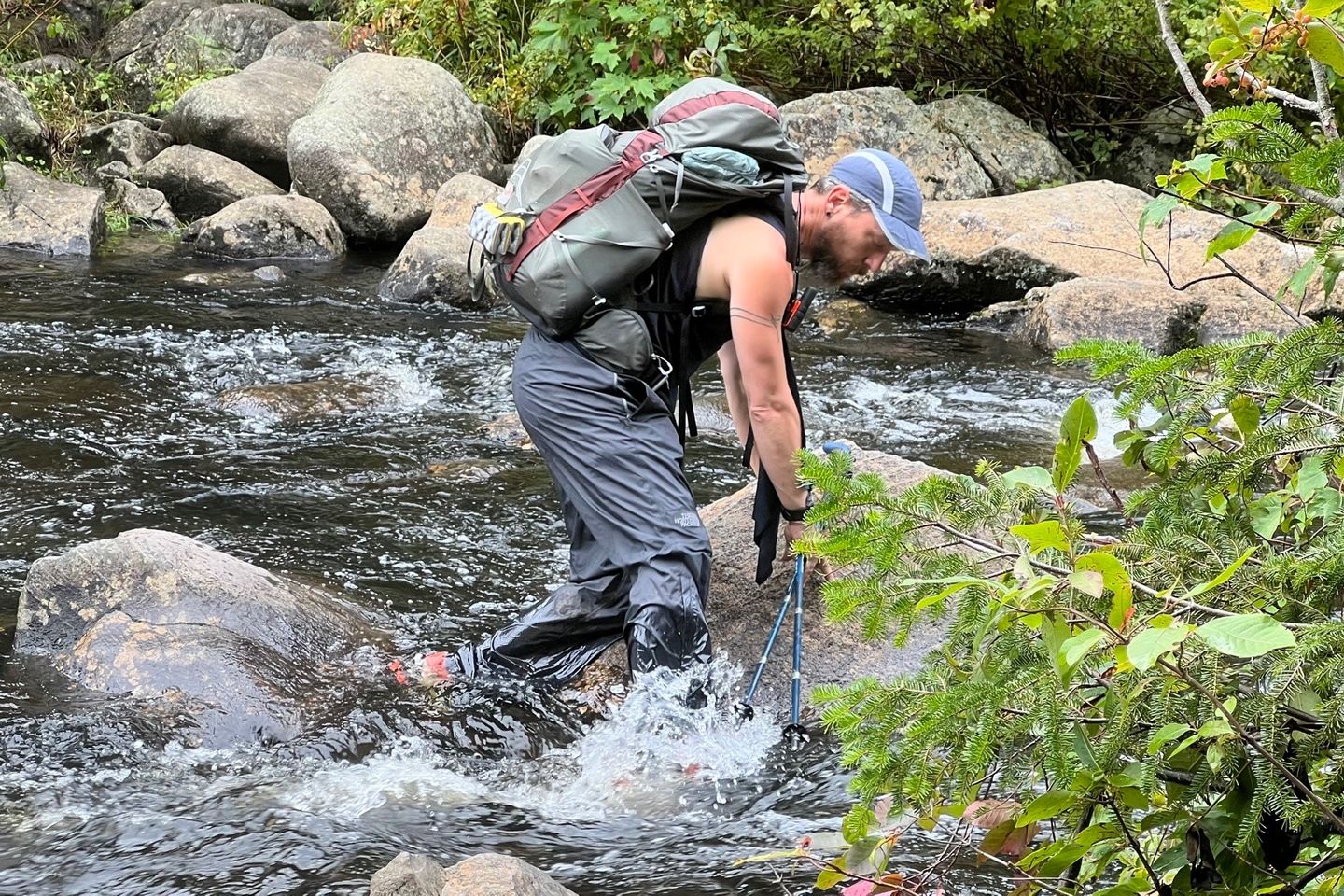 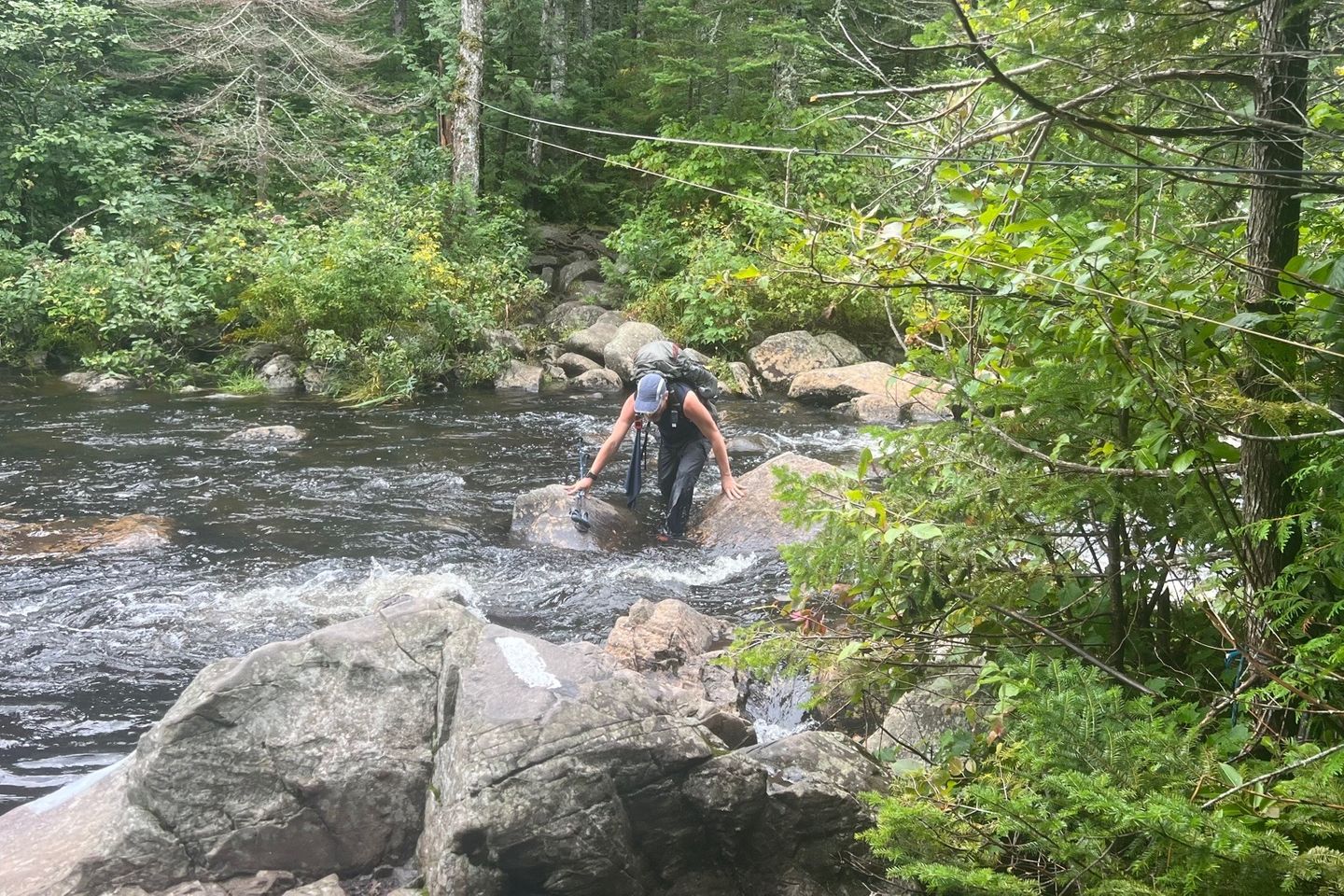 Just my luck that I would wake up on the day I would be climbing White Cap Mountain to see Katadhin in the distance (Baxter Peak is the top of Katadhin) and it would be raining like crazy! It came down so hard that the whole tentsite flooded. The bathtub floor of my tent was like a waterbed because of how much water was underneath it. I found I have a pinhole in my floor because of it. I’ll have to patch that. When we got to the top of White Cap Mountain, it was very windy, very cold, very wet and we couldn’t see a thing. Everything was gray around us. I took a picture using the PeakFinder app with it showing contour lines and names just so I could see where we were “supposed to” see Katadhin for the first time. Oh well. It will be that much more spectacular when I finally see it for my first time, I believe, at Abol Bridge after leaving the 100-mile wilderness. The rest of the day was pretty smooth, until we got to East Branch Pleasant River. That was the SKETCHIEST thing I’ve ever done! It’s the only water crossing to date that really scared me. This time, I made sure to unbuckle my pack just in case I fell in. You don’t want a heavy pack pulling you under. Better to lose everything in your pack than to lose yourself. The force of the water was strong enough to almost sweep my legs out from under me and the water was so dark, I couldn’t see the rocks underneath. There were big sections where I’d put my trekking pole to see if there was a rock there and the pole would go all the way down almost underwater. What I did was always keep three points of contact only moving either one pole or one foot at a time. I would move my foot to “feel” the slippery rocks and move it around until I could jam my foot between rocks where I could stay steady. Then I’d move the over foot. It was slow going and halfway across when I could sit on a big boulder in the middle, I just rested there to catch my breath and to center myself. Sparkle was just as shaken over the ordeal and she had gone first. She took pics and video of my crossing and I was so fed up with it, I almost told her to not record me. Glad I didn’t because it’s a crazy thing to remember. Hope I NEVER have to do something that crazy again. I’m sure it was worse than usual due to the heavy rain that morning. We made it to Crawford Pond and as we were hiking along the east side, the sky got really dark and the wind started gusting nonstop. We could sense it was going to start pouring again. We found a stealth site off from the side of the trail that’s a good spot for one tent but we quickly set up both of ours in that single spot just as the sky opened up again. With soaking wet shoes, socks, pack, and a tent still wet and covered in dirt and pine needles, we hunkered down just to get soaked again. I really hope I get to dry out my tent tomorrow. We didn’t make it as far as we planned today but we’ll still be able to make it to Jo-Mary Road in time for our resupply drop-off. We may make tomorrow a short day as well so we can find a sunny spot, tie my bear line to a tree to make a clothes line and hang everything to dry. We don’t have the luxury of getting to town to dry out before moving on. After leaving this wilderness, we’ll be in Baxter State Park and ready to climb to the finish line.