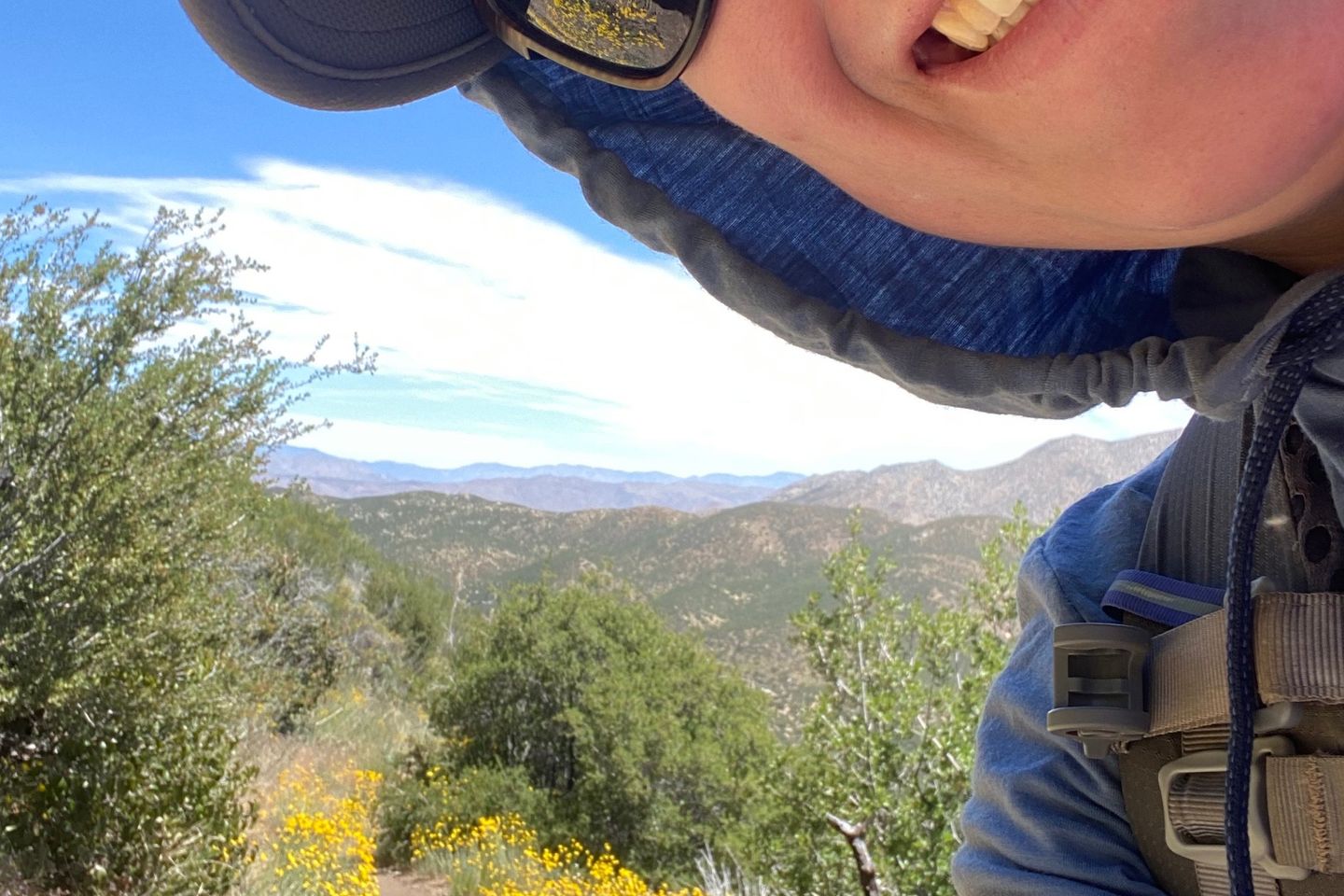 Rose: evening dinner giggles with amazing backdrop Bud: Julian tomorrow with food, beer, and some gear refreshment Thorn: a little too much sun on my shins and face (I need to buy more sunscreen)

I let myself sleep in until 6, but I woke up at 5:20. I like these early mornings. The desert scenery has returned just in the high mountains: dry sandy rocky ground with shrubbery everywhere. No actual trees except at water sources, of which there are few. The wind persists although more gently. It’s still windy enough to prevent me from using my umbrella for shade—which has resulted in me getting a little too much sun in the last couple of days. It’s not a burn, but my skin feels hot and dry.

The morning was only 4 miles to water after dry camping last night. Then 9 miles after that. 3 miles to camp for tonight and then 6 miles to water tomorrow morning. Calculating how much water to carry is a science. I tend to carry too much. I end up with an extra liter I forgot about every time I get to a water source. So far, the water sources have been pretty reliable. The two today were spigots from water tanks. The previous were spigots at campgrounds or some small creeks.

Even though it’s relatively cool temperatures for the region, I needed a break from the sun by midday. I ran into Mitch & Angel at a resting spot. They moved on but I stayed, aired out my feet, and read my book under the partial shade of a bush. After little over an hour, I left my shade to make the final hour long push to the second water source of the day, where I met my friends who had been resting there.

After filling up on water, we set off on a break neck speed (at least for me in the back) along a rather precariously placed section of trail. We are now descending out of the mountains. Whereas earlier in the day had been a wider path with a shoulder before a moderate slope downward, this section was narrow with no shoulder and a steeper down for about 2 miles. Any bush would stop a tumble at least.

Our campsite is glorious tonight. Set on a rounding turn on the trail overlooking the desert valley below. It’s much less windy than the prior two nights so we can sit out and talk and laugh. Tonight it’s Mitch, Angel, Rebekah, Jose (a woman from the Netherlands who was also at Mt Laguna), Lucy (who I started with at CLEEF), and a Swedish man. Semi speeded along ahead. He’s meeting a friend in a few days and has to keep on schedule for the meeting. I imagine we’ll see him down the trail. That’s the nice thing about the trail. Except for the speedy Triple Crowners and ultra ultra lighters, you see most everyone a little ways down the trail. It’s not usually a hard goodbye.