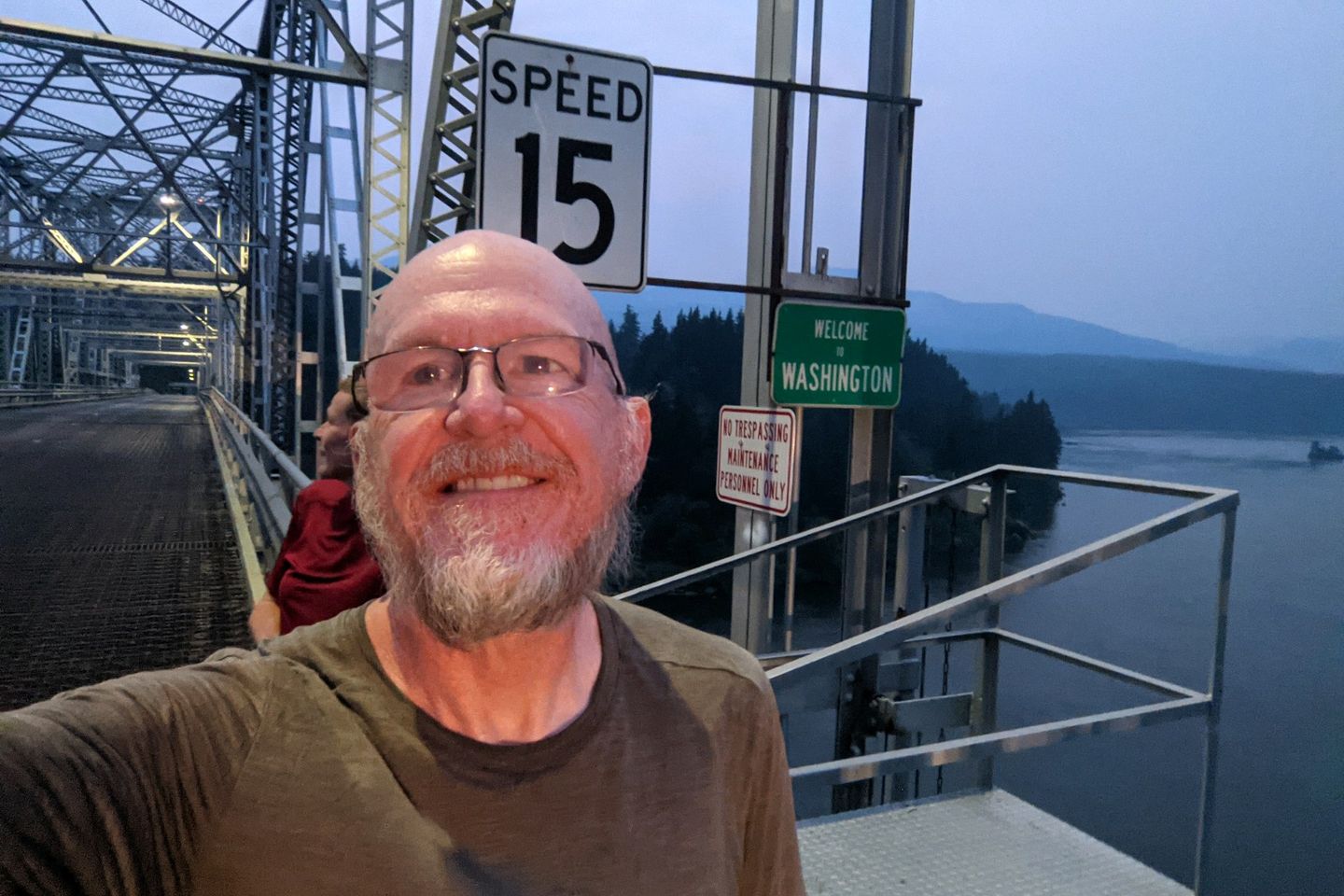 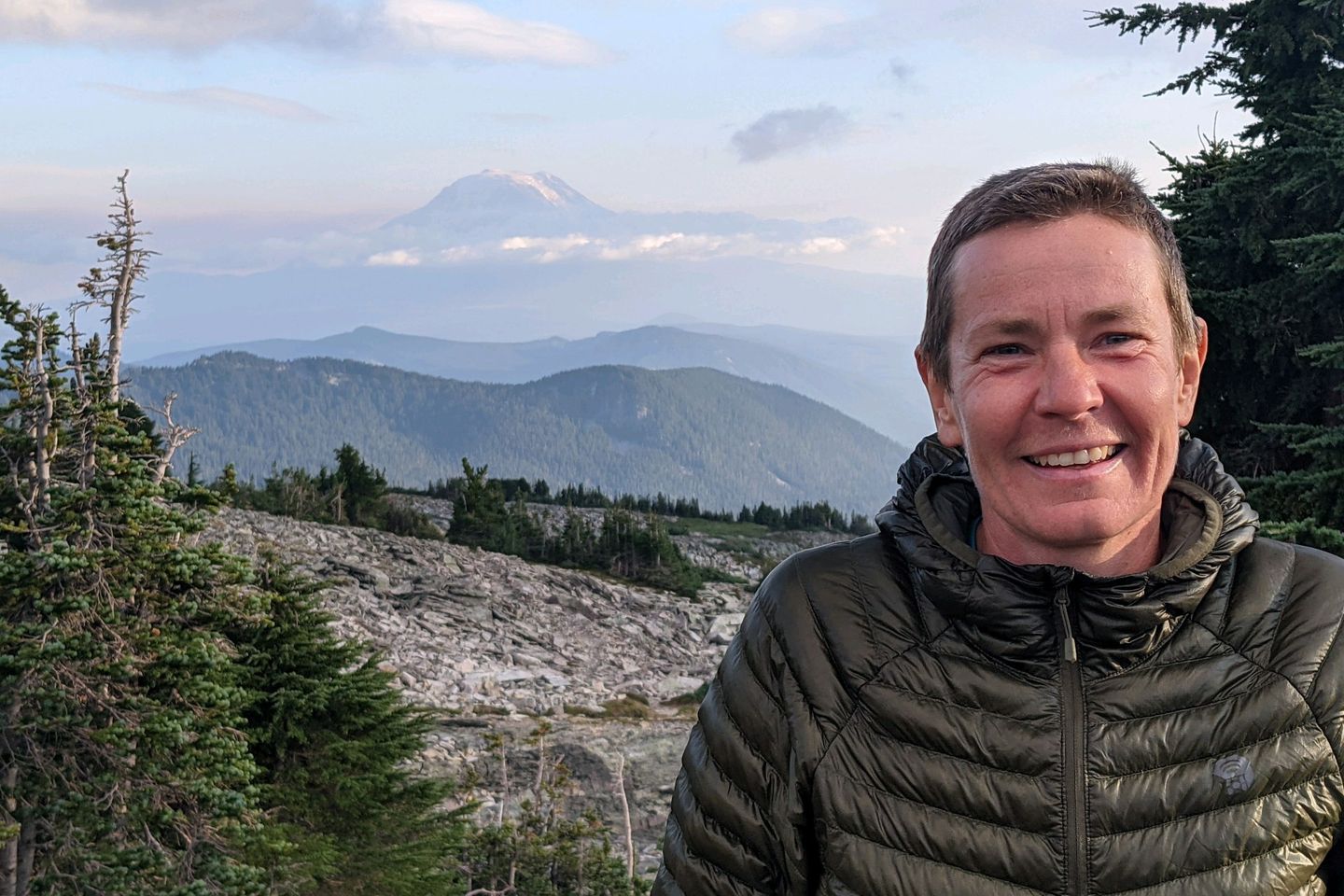 I am writing this entry from Leavenworth WA, 27 miles east of the PCT, a town that is designed and built to simulate a Bavarian village in the Northern Cascades. Really. Well, it's more of a Disney simulacrum if a Bavarian village, but at least the Schnitzel is good ("Folks, don't order the Schnitzel. They're using Schnauzer!"--Bill Murray, Stripes).

Seriously, I have no idea what possessed people to build a gaux-Bavarian village in this particular location, but I'm traveling with a German, so we had to check it out.

Since I last wrote to you, Anchor and I traveled 480 miles in 14 days without a full day off, checking Oregon off our to-do list, and polishing off almost 2/3 of Washington state, passing by some of the most beautiful scenery and over some of the most difficult treadway on the Trail. Both distance and time set personal records for me (and probably Anchor too).

How in the world did this happen?

It starts with a bus ride ("It starts with an earthquake, birds and snakes, an aeroplane..."--REM, It's the End of the World as We Know It). As you may remember from the last entry, Anchor's and my luck avoiding fires finally ran out at McKenzie Pass OR. Immediately ahead was an active fire closure, and just beyond that was a fire restoration area (also closed by the US Forest Service) that we had to get around. The most efficient way to do that was to ride a take a bus ride from the lovely town of Bend OR to the hamlet of Government Camp OR and then a shuttle from Government Camp to the famed Timberline Lodge, where we intersected the PCT once again, just about 100 Trail miles from where we started.

The total fire closure area was only about 39 miles, but the road situation made it best to skip the 100 Mike's surrounding the two closures. To be clear, we could have gone to heroic lengths, making long hikes into and out of the back country to make more PCT miles (or, at least, avoid fewer PCT miles), and we know some hikers who did just that. However, after some deliberation, both Anchor and I agreed that we are past the stage where we are interested in doing cheetah flips to be more "pure" about our hike. Our solution is what the PCT Association recommends, and it's the easiest thing to do so that's what we did.

Will I come back in the future to make up these miles when the fire closures reopen? Maaaaaybe.

Special note to Destry: this is why I bailed on the co-hike. This area is exactly where we would have been hiking together, and I would hate to have brought you out to Oregon for a bus ride.

The Timberline Lodge is at the foot of the very impressive Mount Hood (named after British Admiral, Sir Samuel Hood) and served as a movie set for Stanley Kubrick's The Shining. After the bus ride, Anchor and I opted to skip the reputedly lavish buffet in the hotel and start hiking immediately. We thus also missed an opportunity to pose with Jack Nicholson's axe from The Shining ("Heeeeere's Johnny!" Jack Nicholson, The Shining).

Over the next 14 days, Anchor and I went on an Odysee/death march that brought us to our current position.

On the first 2 days, we managed to hike into Cascade Locks OR, right on the Oregon-Washington border, negotiating a 5,000-foot descent into the Columbia River Gorge (RIP, my knees) and dropping below 100-feet above mean sea level. This is the lowest point on the PCT, but Anchor and I are feeling pretty good about finishing Oregon in a little over 2 weeks, even if we had to do some of the miles by bus.

The next two-day leg of our journey took us to the tiny but beautiful town of Trout Lake WA (after climbing 5,000 feet out of the Columbia River Gorge, of course). The wonderful retirees of Trout Lake have banded together to shuttle hikers from Trail to town and town to Trail 4 times a day, which makes things so easy! Anchor and I got into town on the last shuttle, did a 3-day resupply, had 2 meals, showered, and got out of town on the first shuttle the next morning, all in about 12 hours.

From Trout Lake, our journey carried us on a uppy-downy, three-day stretch to White Pass WA, where we had resupply boxes waiting. The first two days of this stretch was our introduction to Washington's famous damp, foggy weather, but we arrived in the stunning Goat Rocks Wilderness just as the weather was lifting... also just as the wind was picking up, making for an uncomfortable night high on the slope of Old Snowy Mountain, with an eye-popping view of Mount Adams. Also, we were visited by the mountain goats after which this wilderness area is named. They didn't seem much bothered by our presence or interested in our food. They were just wandering by.

The following morning, it was still so windy that Anchor and I delayed hiking for two hours, hoping the wind would die down a bit. It didn't, but once we hiked a mile or so, we went around Old Snowy and were instantly shielded from the bluster. That gave us a much safer passage along the Knife's Edge which offered panoramic views of the Wilderness and our first glimpse of Mount Rainier, like Mount Shasta much, much larger than all of its neighbors.

This stretch contains some awesomely challenging hiking and drops us steeply down into White Pass, which isn't even a town. It's just a gas station/convenience store/rural post office where Anchor and I can pick up our resupply packages and gorge on some pizza before launching out the next morning for a four-day schlep to Snoqualmie.

Except that, leaving White Pass, we climb into a fog bank/rain cloud, and we stay in it for the next 3 1/2 days. That's right, 3 1/2 days of moisture, misery, and not a single view of Rainier which, at one point, is no more than 12 miles away. I am not making this up.

The weather does clear up a bit as we are hiking down the ski slopes into Snoqualmie, where both Anchor and I have resupply boxes waiting. Great timing...

The good news is that the nice weather held through the next morning when we cross under I-90 to start our 8,500 foot of climbing for the day. You read that right: 8,500 feet! That's the most climbing we have had in a single day since we were in the Sierra, 1,300 miles ago!

But we did have some great views!

The Alpine Lakes Wilderness, north of Snoqualmie, delivers exactly what you would expect--spectacular, rugged terrain on a footpath that winds it's way through a series of glacial lakes. Plus a lot of climbing, descending, and rocks. RIP my ankles.

The three days of this stretch have about 18,500 feet of climbing and very close to the same amount of descent. Quite challenging.

Eventually, the Trail delivers me to Stevens Pass and US Highway 2, where I get a hitch into Leavenworth (about 27 miles away) from a nice woman who is just moving to town to start a job with the US Forest Service. She drives me straight to our hotel and won't take any money from me for gas.

At the hotel, I meet Anchor who, as usual, is ahead of me.

Even better, we are joined by old friends, Marion and Jan-Marc Jouas, who live on Whidbey Island, near Seattle. Lt Gen Jouas was my next-to-last boss in the Air Force, and my best one. Both he and Marion are great leaders and mentors, and being able to see them for a couple of days is very therapeutic after a long, stressful section of hiking. I can't thank them enough for taking their time to drive out and see us.

We also see several hikers we have been leap-frogging with for the last 1,000 miles or so. Fly and Taters are kicking it into turbo mode, and will probably finish at least a couple days ahead of us. Pooch, who will finish his triple crown (hiking all three major scenic trails in the US: the Appalachian Trail, the Continental Divide Trail, and the Pacific Crest Trail), is also at least a day ahead of us, and, given his speed, will probably be 2 or 3 days ahead of us at the finish.

We're down to 185-ish miles to go (plus another 30 miles to hike back from the border to the nearest road crossing). Not 100% percent sure when we will be done but probably sometime in the next 10-11 days.

The next section is, of course, harder than the last. But we will be headed into it well fed and well rested tomorrow.

NOTE:. Approximately 100 miles of this entry's miles (from McKenzie Pass OR to Timberline Lodge OR) were via bus, rather than on foot. This was necessary to avoid one active fire and one on-going Forest Service fire closure for environmental restoration purposes.

Sea Otter Fact of the Entry: Sea Otter mother's usually give birth to their first pup between the ages of 4 and 5 years.