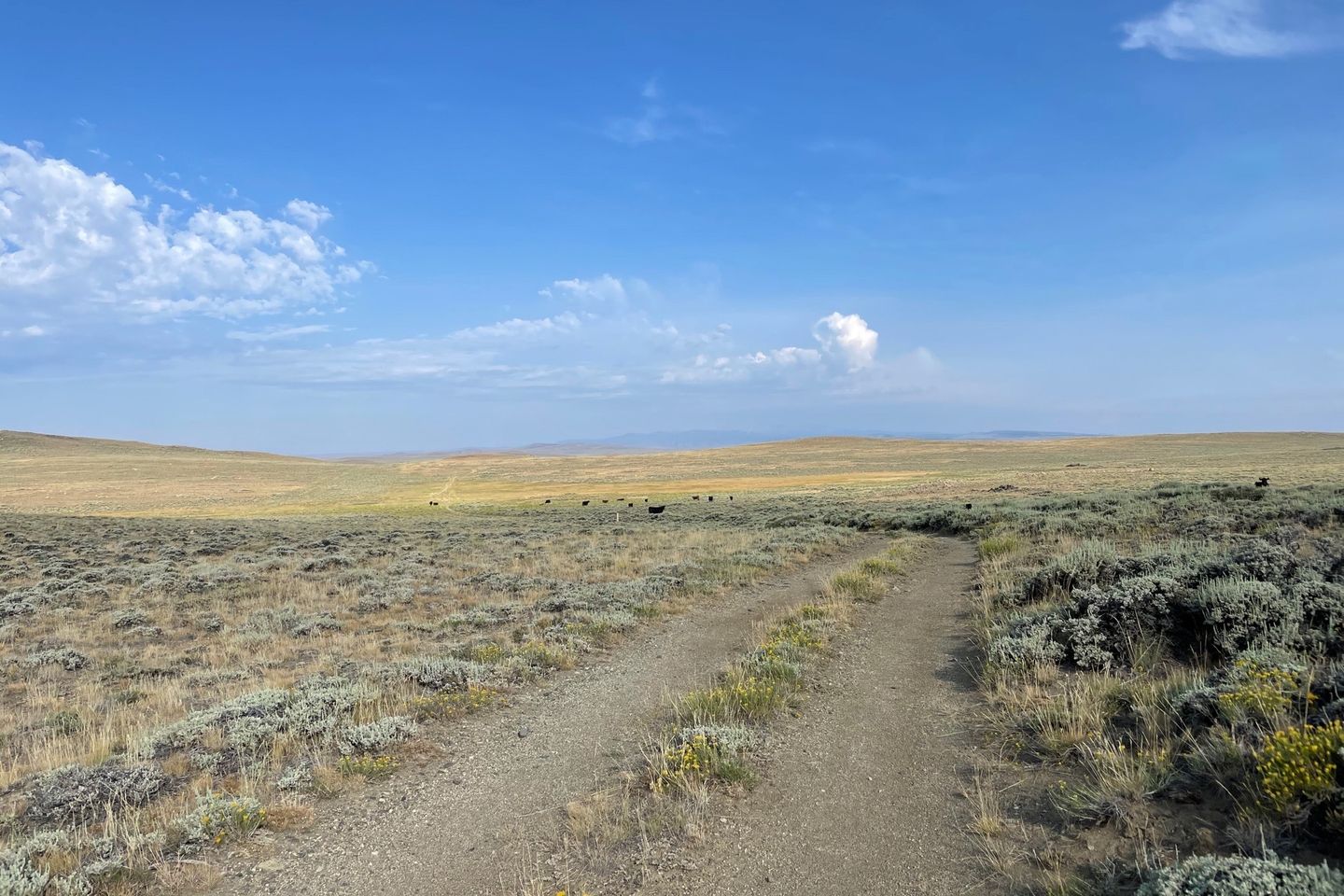 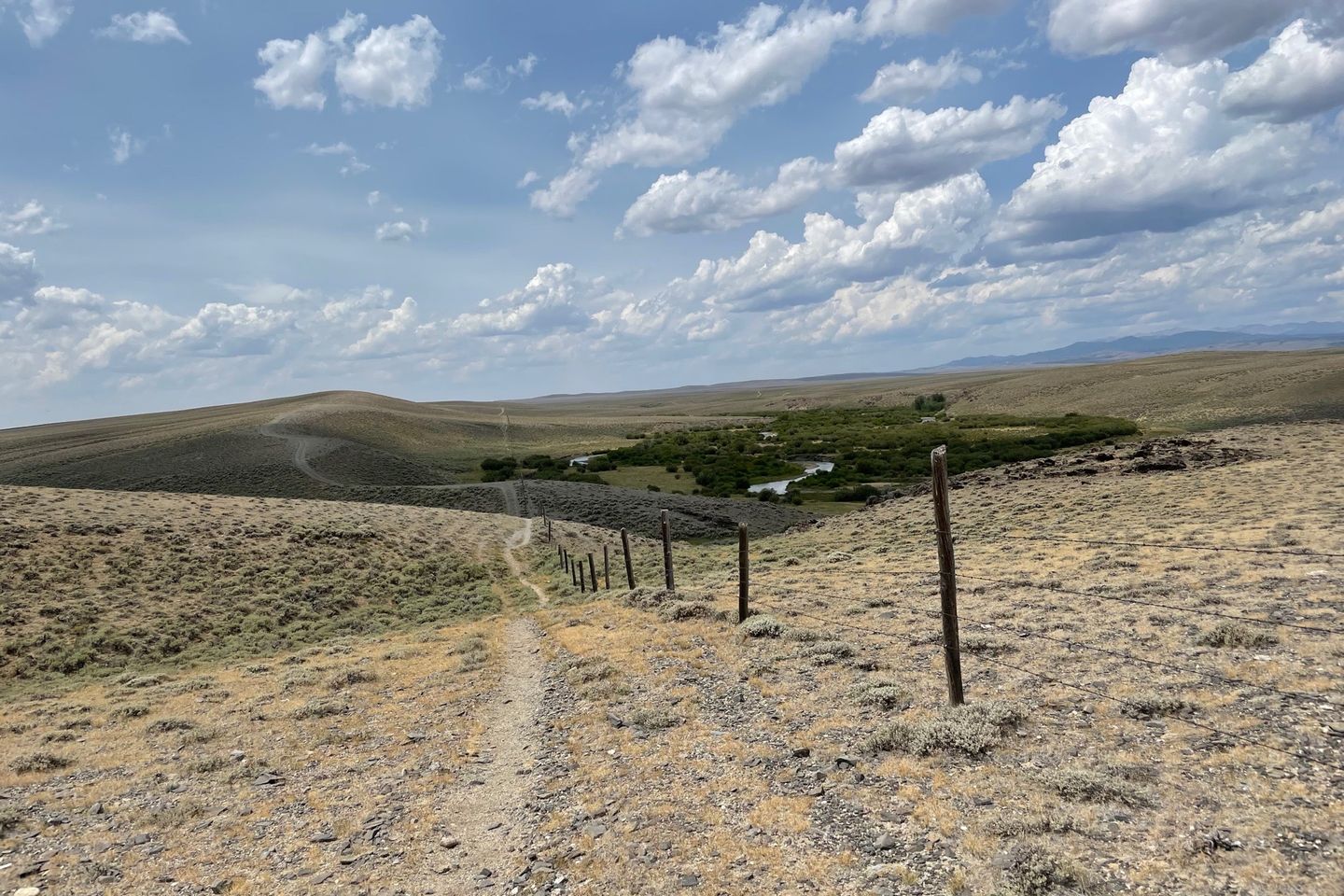 Surprise - another thunderstorm last night. It really was a surprise. I woke up at 2 AM to see lightening and darkness rapidly approaching from the west and zipped my outer tent door. We got some pretty intense winds and heavy rain, but it didn’t last for long. At least the morning was beautiful and calm and the storm had abated long enough for my tent to be mostly dry.

Again the morning was cool and calm for good hiking weather. The first goal was a water source called Mormon Springs.

Mormon Springs had great water, but was a little hard to locate exactly. The spring itself is not fenced off and is on the backside of a low mound/rock formation. It is not obvious from the trail. The water was cold and clear and much appreciated.

We had decided that we would all meet up at a bridge over the Sweetwater River late in the day to decide where to camp. Our original plan (from several days ago) had been to camp at the Sweetwater. But we felt now we could go further and we had motivation to do so; my dad is meeting us at South Pass City to bring us into Lander. We don’t want to be late for that and want to have less miles to cover in the morning.

The trail left dirt roads for a while to follow along the bank of the Sweetwater River. I loved this as the river is important historically as the water source for the Oregon Trail after it leaves the North Platte River west of Casper, Wyoming.

I found Feral near the bridge, laid back in a chair under a portable awning. T, supporting his wife, had set up there and was now welcoming us. Thank you. We waited for Pockets and Just Jim to make a decision for where to camp. We all felt good (even my left shin was less sore than normal) and we decided to push on another 7 miles to leave an easy 8 miles to South Pass City tomorrow. We also decided to follow the recommendation of previous hikers and not follow the redline of the CDT for the next several miles but instead use a dirt road that closely parallels the trail. Many have commented that the trail in this area is not really a trail but just some markers occasionally in the sagebrush. We picked a spot along the road to meet and find the nearest open area in the sagebrush to camp.

Feral and I set off first from the bridge. We did a little cross-country route of our own to cut off a big 90 degree bend in the road. The hiking went well, but we started noticing a change in the conditions. Darker clouds were forming behind us, but also the visibility was dropping. The visibility had been reduced somewhat all across the Great Divide Basin from wildfires in California, but only a little. Now it was dropping quickly. Feral found an open area just prior to our planned spot that was too good to pass. As we set up our tents, the winds picked up and became gusty. No fun. But, eerily, a wall of reduced visibility approached. It looked like rain at first but then we realized it was smoke. As it reached us we could smell the smoke and the sun turned red. Since I had coverage, I was able to find out this was predicted, as a high pressure system moved in. That was a relief since the sudden change could have indicated a nearby fire.

Pockets and Just Jim had spent some time visiting with T so were a ways behind. Unfortunately, that meant dealing with the wind and smoke while hiking. They arrived ready to set up. Who knows if it will rain tonight. But it is exciting that I get to see my parents tomorrow along with it being a town day!

That’s awesome! I’d love to see some of those places.

I lived in Casper, WY for junior and senior high school, so learned a lot then and got to visit the trail near there as well as Devil’s Gate and Independence Rock. Not quite obsessed but definitely a geek.

I have a persona obsession with the Oregon Trail and its history. I’ve visited many parts of it. So cool to see shots of it here. Can’t wait to hike out that way!