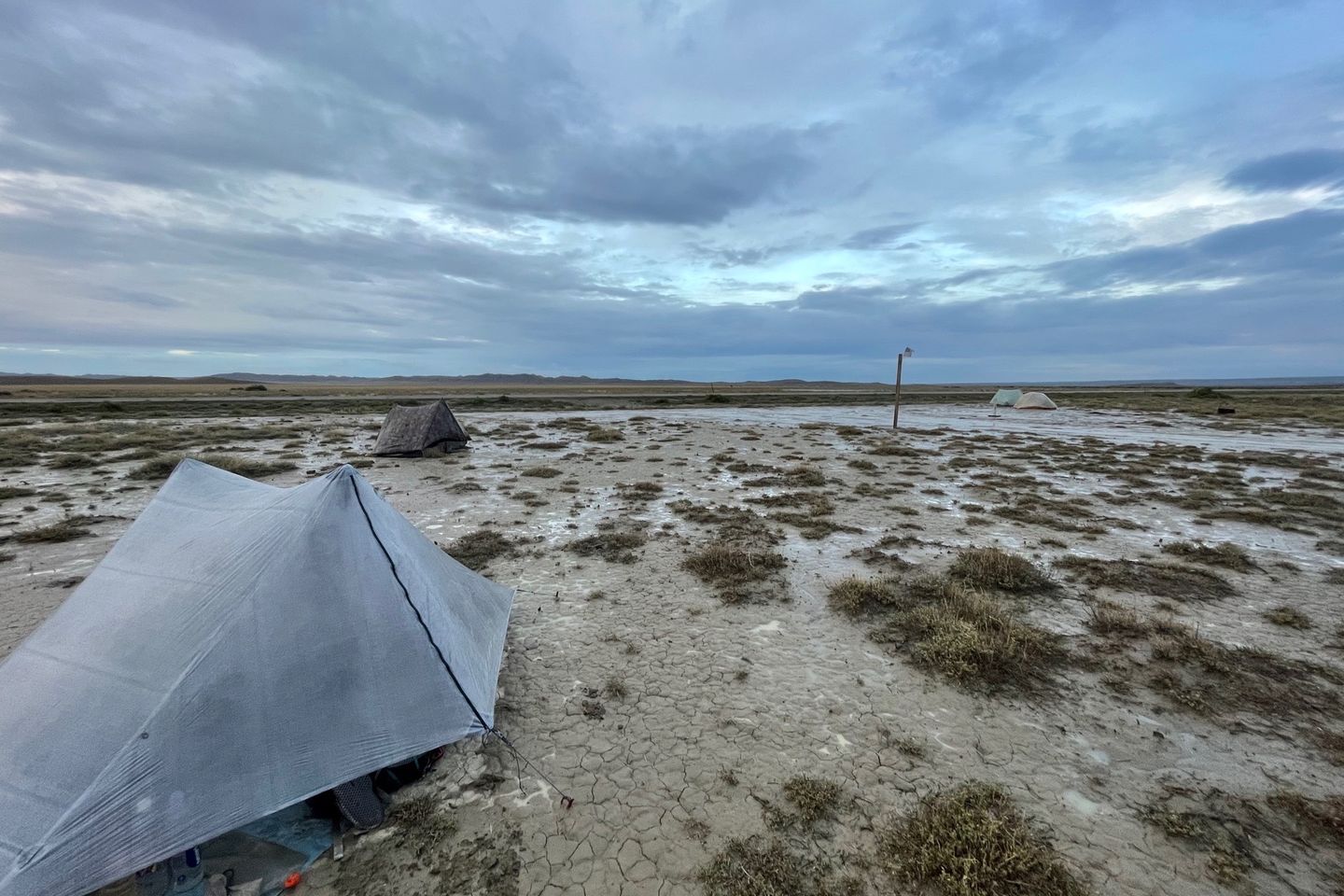 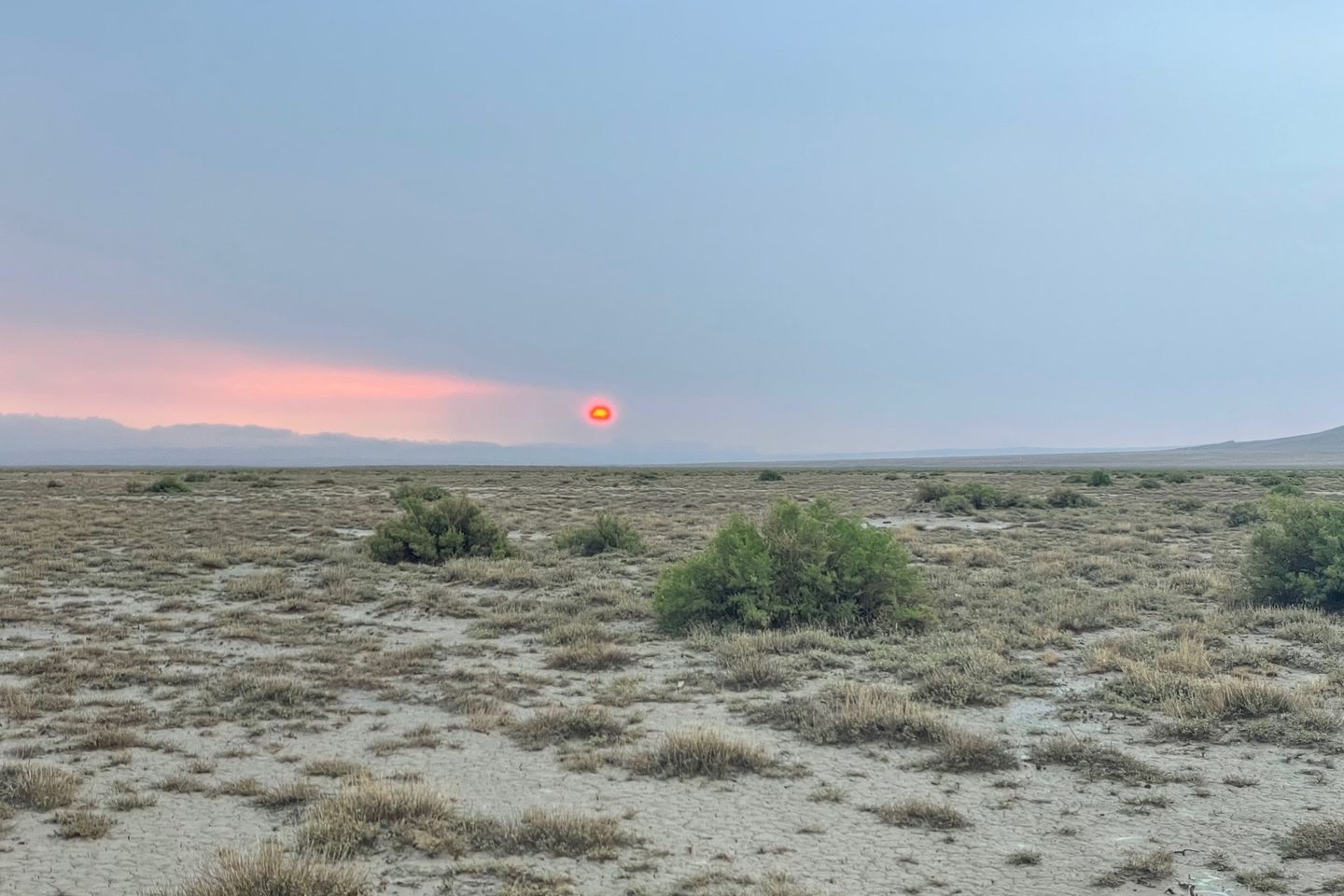 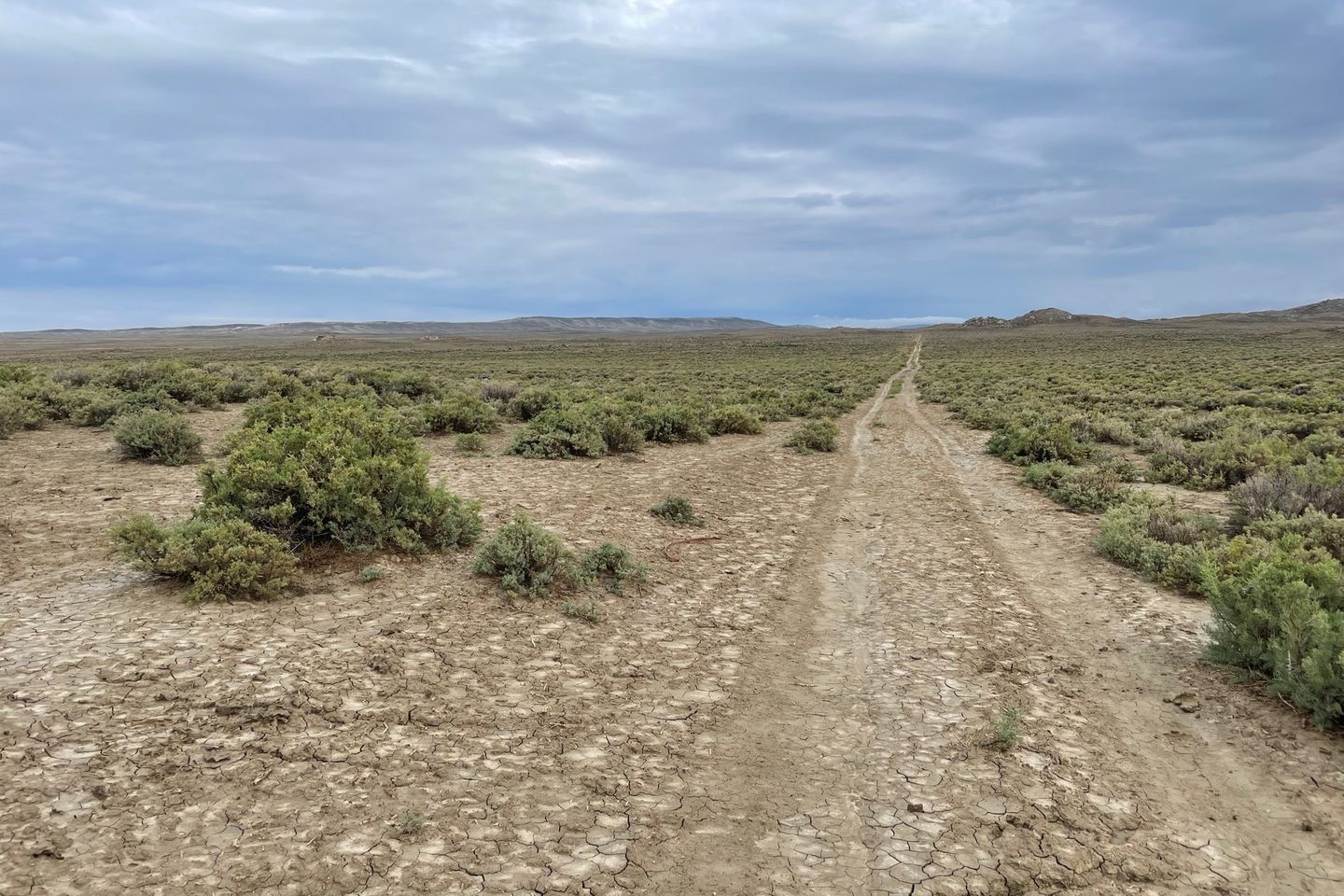 Well, maybe camping on cracked clay soil wasn’t the greatest idea. No thunderstorms last night, but a steady rain developed early in the morning hours and stayed steady for several hours. It was enough to puddle up in places and turn the top half inch of soil into a sticky mess. Yuck. And the Great Divide Basin is supposed to be dry?

After packing up the wet and muddy tent, I again took off first. My shin was far better than expected but still hurt. Thank you ibuprofen. The first part of the trail was an old paved surface, but that quickly turned into dirt/clay. Hiking in that when wet is miserable. The wet clay sticks in layers to the bottom of your shoes and cakes up thick until there is too much and it falls off and starts over. Even worse, it does this unevenly on each shoe and between shoes. For example, the right shoe may shed the front half and still have a thick layer toward the heel while the left shoe has a moderate layer all across. It’s a horrible feeling. Stopping to attempt to scrape it off has no practical effect; within two steps it starts all over.

The only good news was that the trail was intermittently sandy. Usually I don’t like hiking in sand, but it is far preferable to the wet clay. What a choice. There were a lot of left over clouds and a light breeze that kept it cool, so it was not all bad.

There were lots of pronghorn to see all day. And something new - our first SOBO hikers. We talked to several. These are hikers who started in mid-June (early for a SOBO CDT) and have been crushing big miles. The only bad news is this is kind of far south for us to be seeing our first SOBOs. We are definitely behind.

The wet trail lasted longer than I anticipated but gave way to drier conditions eventually. There were some sections with deeper sand, but nothing too bad. Our first goal of the day was a water source named Bull Springs. The terrain was more varied than I had pictured. There were some small up and downs with changing rocks. I liked it. And the mostly cloudy sky kept it cooler than normal. Bull Springs was in a small valley with very much larger sagebrush, some higher than me. This spring had a solar pump feeding a small pond and a culvert pipe in an enclosed area. Perfect. Though it was a little early, I ate lunch there as well. Just Jim and Feral showed up as well.

After our break, it became obvious we could be in for afternoon thunderstorms. We hoped for the best and pushed on. The next stretch was much flatter and straight. I could see the trail ahead for many miles until it disappeared over a rise. That turned out to be mentally hard. Sometimes it felt like I was making no progress, with that trail on the hill seemingly not getting any closer.

Thunderstorms did develop around us, but we always seemed to be just on the edge of them, with only a drop of rain or two. Actually some good hiking weather. I ran across J taking a break in the afternoon and we leapfrogged each other for the remainder of the day.

Our goal for the day was a big water source, called A&M Reservoir. It was built with a joint effort by an oil company and outdoor enthusiasts to provide some fishing opportunities in the basin. Seems odd out here, but it is next to a major, well maintained dirt road that makes it accessible.

My shin was OK, but grew more painful with more miles on it. It especially hurts on descents towards the end of the day.

We did eventually reach the hill and made the descent toward the reservoir. It had became somewhat windy by now. There were some campsite possibilities on the edge of the reservoir but they were exposed to the wind. We chose to set up camp in a large ravine that led from the outlet of the reservoir and had a shelf just large enough for us and provided some wind protection. Hopefully no rain tonight.

Edit: Today is my 30th anniversary! Thank you for being so supportive and sticking around so long. I love you Karen.