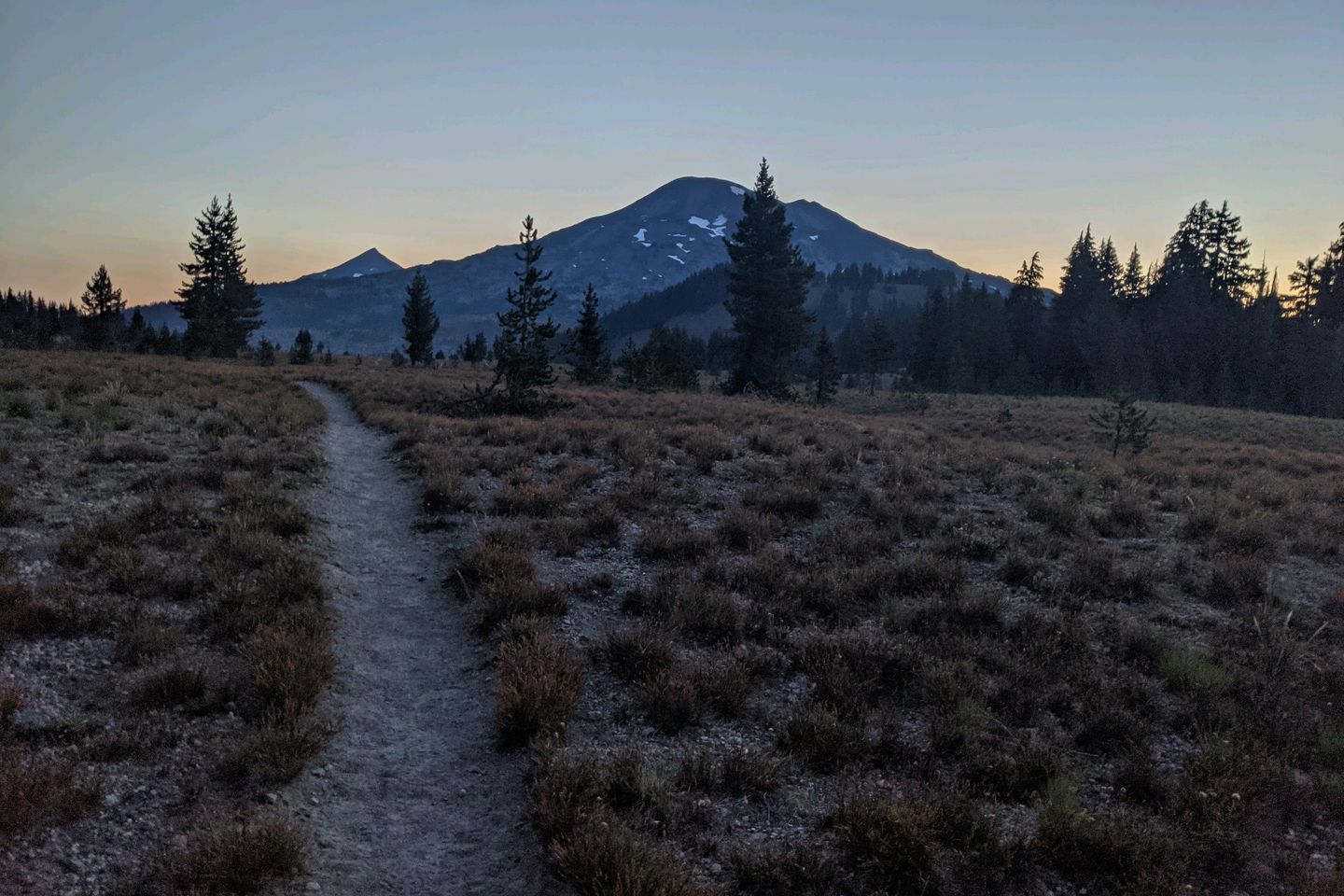 This has been a long 12 days, through some wonderful terrain and some not-so-wonderful terrain. Anchor and I were able to make this long stretch by sending resupply boxes to ourselves in two locations (Mazama Village and Shelter Cove) where the trail passes near convenient stopping points that don't have good local resupply options. This is a technique we'll use again as we get into Washington.

Our weather, while still quite warm on some days, has been quite a bit better than what we experienced during the previous month. We had a couple of very cool days (temps topping out in the low 70s) in which I was able to push up my pace a bit. We also had some chilly nights. It's always harder to get out from under the quilt on those mornings.

The dry weather continues, which is generally good for us, but terrible for the fire situation. Also, the water carries have continued to be challenging. We had at least on 35-mile stretch with no on-Trail water. If it had not been for two well-maintaned water caches (by a trail angel who goes by the name Devilfish), this passage probably would have been unhikeable. Thank you, Devilfish!

Oregon, as advertised, is generally flatter than Northern California. The average daily elevation change is generally less than what we were doing 2 weeks ago in NorCal, and the climbs and descents are more gentle. I needed that relief badly.

Most of the miles are gorgeous, alternating between sweeping mountain views and long walks in fir and hemlock forests.

On the other hand, at least 25 percent of the Trail in Oregon has been through burn zones, some new but some quite old (one of them was from a fire in 1996) and slow to recover. Often these burn zones cover miles of the Trail, are filled with blow-downs that block the path, and offer no protection from the blazing sun. These are not the stretches we will remember fondly.

This section of the hike included two major scenic landmarks, the first of which was Crater Lake. The deepest lake in the United States, Crater Lake was formed about 7,700 years ago when an enormous volcanic eruption caused Mount Mazama to collapse into itself, leaving--you guessed it--an enormous crater behind. The crater, now 1,949 feet deep, eventually filled with water, forming the lake we know today. Crater Lake is not fed by any rivers or streams. Instead, the evaporation of water from the lake is almost perfectly balanced by rain and snowfall. Hydrologists estimate that the complete water content of the lake is replaced about every 250 years.

Unfortunately for Anchor, FedEx (a Swiss-Mexican hiker we have been hiking with), and me, our visit to the Crater Lake Rim Trail coincided with the arrival of heavy smoke from wildfires and our views weren't as good as they could have been. Moreover, the famous blue Crater Lake water just looked black from wherever I stood. It wasn't a terrible experience, just different than what I was expecting...and kind of spooky. If you want the typical photos of a vibrant blue-watered lake, you'll have to Google them.

The second major landmark--the Three Sisters Wilderness--was a much better experience. The "three sisters" are all volcanic mountains, formed separately less than 100,000 years ago, and containing no less than 16 glaciers in their skirts. The middle and north sisters are thought to be inactive, but South Sister has erupted as recently as 2,000 years ago and has occasionally shown volcanic activity in this century, so she's considered an active volcano.

The Trail not only presents hikers with magnificent views of the Three Sisters, but winds in and around their skirts, passing an amazing, miles-long deposit of obsidian (and beautiful Obsidian Falls), long hikes over lava flows, and an eye-popping view of Mount Washington, a craggy peak known as Three-Fingered Jack, Mount Jefferson, and veiled in smoke, a distant Mount Hood. Truly breathtaking.

Arriving at McKenzie Pass (mile 1,983!), we met Olivia, Baewatch's fiancee, who is staying here in Bend for the month of August. She very kindly picked us up at the trailhead, drove us to Bend, and...lent us her car for a day so we could run errands! Thank you, Olivia, for your kindness!

Bend turns out to be a great town--probably the nicest place we have stayed while hiking the PCT. Lots of good food, tons of local beers, and a very laid-back, walkable atmosphere. It's a bit hard to leave...

Now, at nearly 2,000 miles, Anchor's and my luck has run out. From the start of the PCT to McKenzie Pass, we have a continuous footpath, but we have now reached the first fire closure that is ahead of us, and there's no good way to walk around it, so when we depart, we'll have our first skipped miles on the PCT. 😔 Really disappointing. Not sure where we will end up (or how), but I'll update you in my next post.

Drop your questions or comments below!

In the meantime, I'm safe, dry, and warm!

Sea Otter Fact of the Post: The population of the southern sea otter has plateaued at about 3,200 individuals. Researchers aren't entirely sure why, but leading theories involve increased accidental predation by great white sharks (who are feeding closer to shore than in the past) and a general reluctance by sea otters to venture far beyond the areas in which they are born and reared.

Thanks, Elf! Glad you are following along!

Hey there, Scree! Currently in Leavenworth WA. Yes, still on the Trail, and getting ready to make a push for the border (probably with a short resupply stop in Stehekin WA). Hope you don't have to evacuate! Praying for you and the firefighters who are battling the blazes in your area

Hi, Bunny! So glad you are following along. Can't wait to catch up with you after this hike is done!

Wondering where you are? Hoping you are still on trail. I am in South Lake Tahoe, packed up if I have to evac for the Caldor Fire which is creeping up on us all in the next few days. Hoping to read something from you soon. Be safe.

Otter my friend, although I am not commenting much on your hike, not a day goes by that I don't think and wonder whay you are doing. You sound and look as though you are doing very well. Be safe and as always, you are in my prayers and thought. Blue Bunny