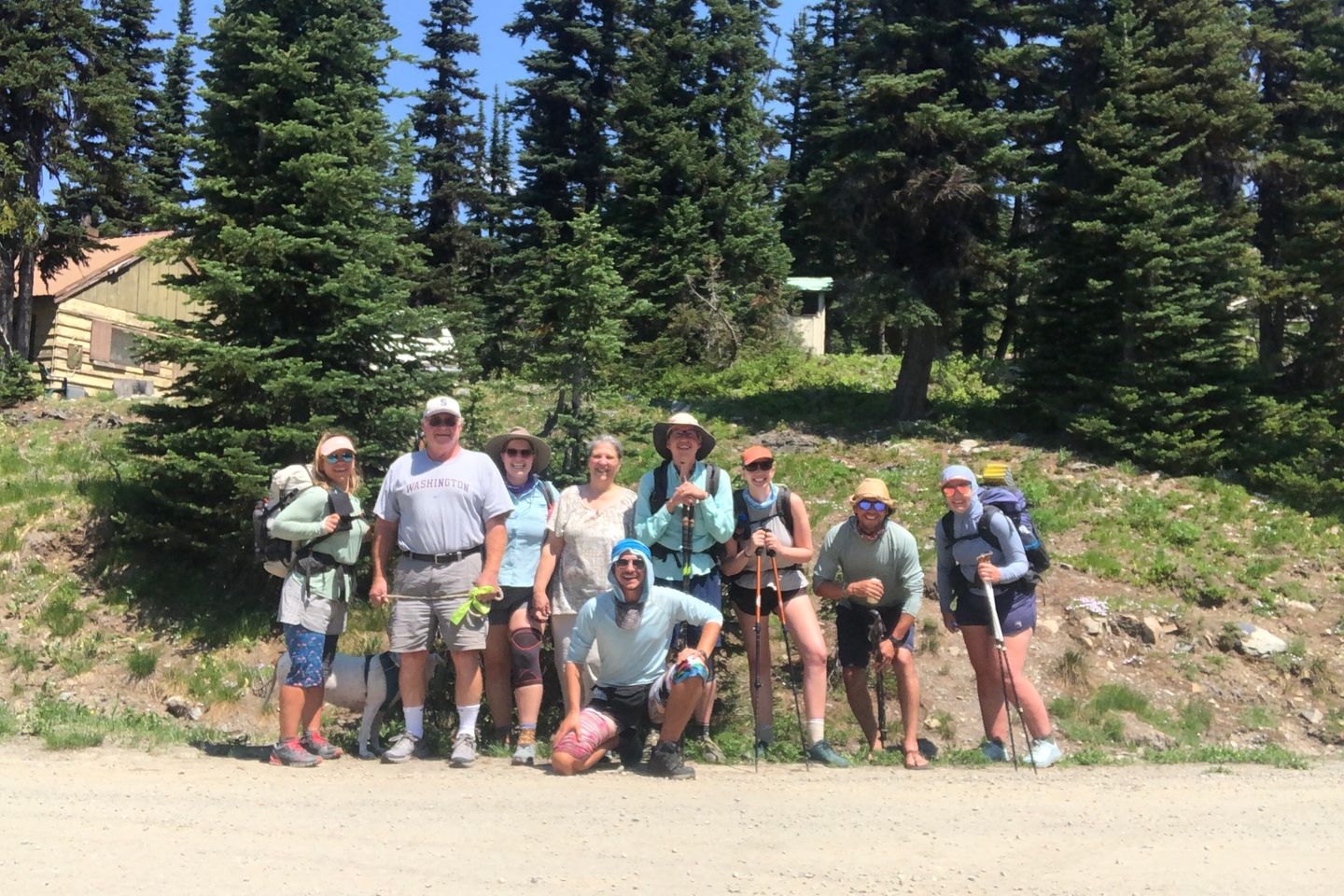 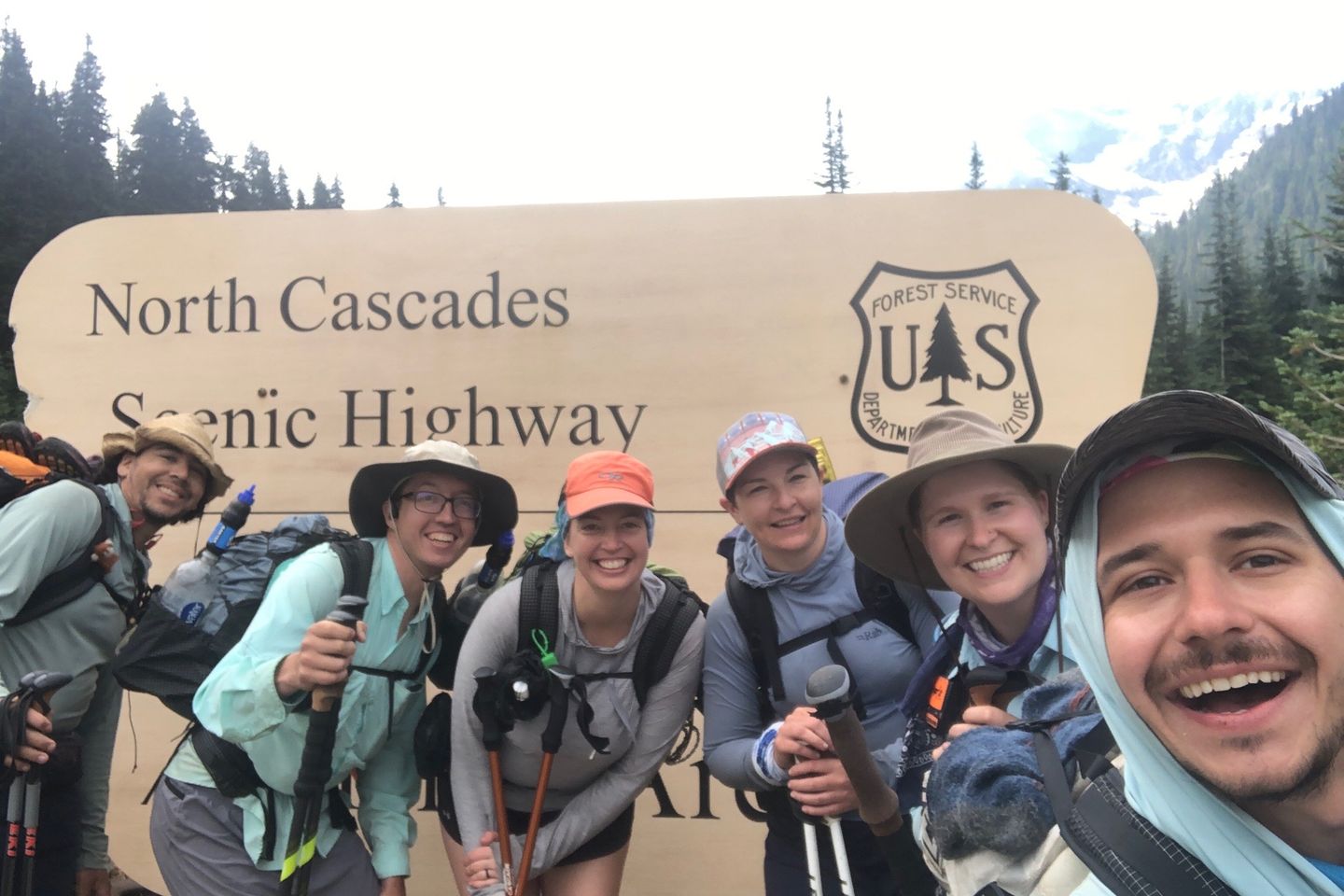 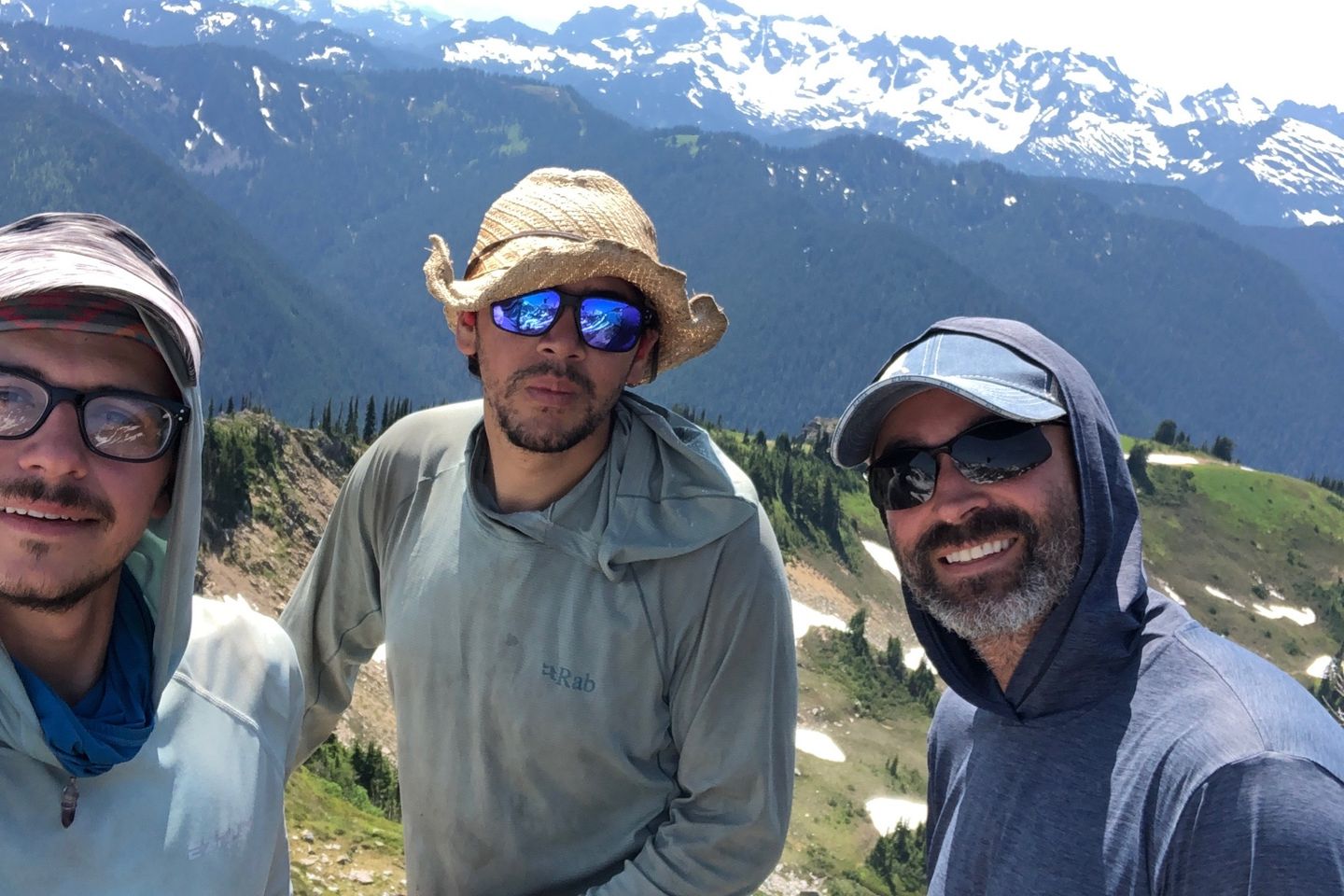 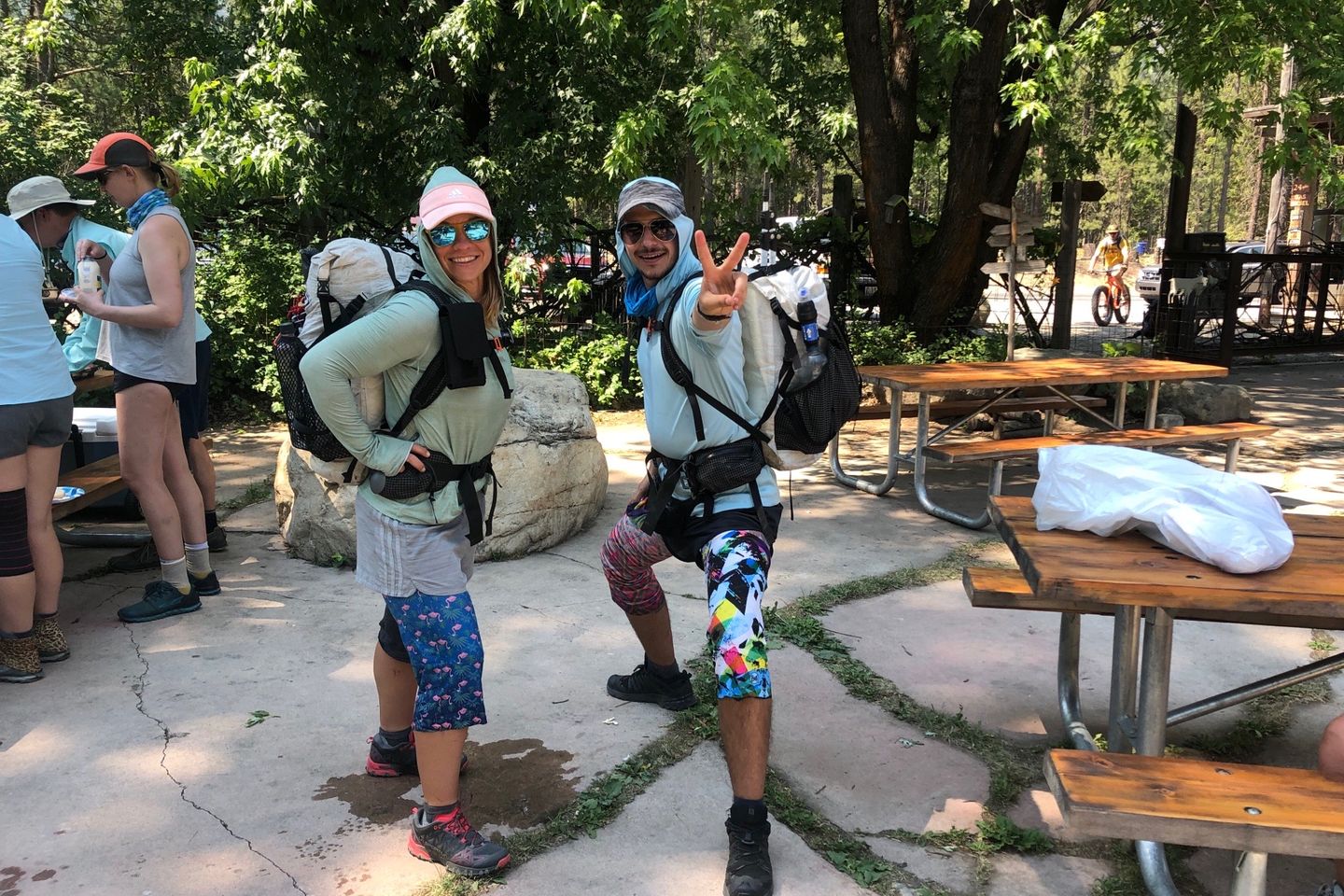 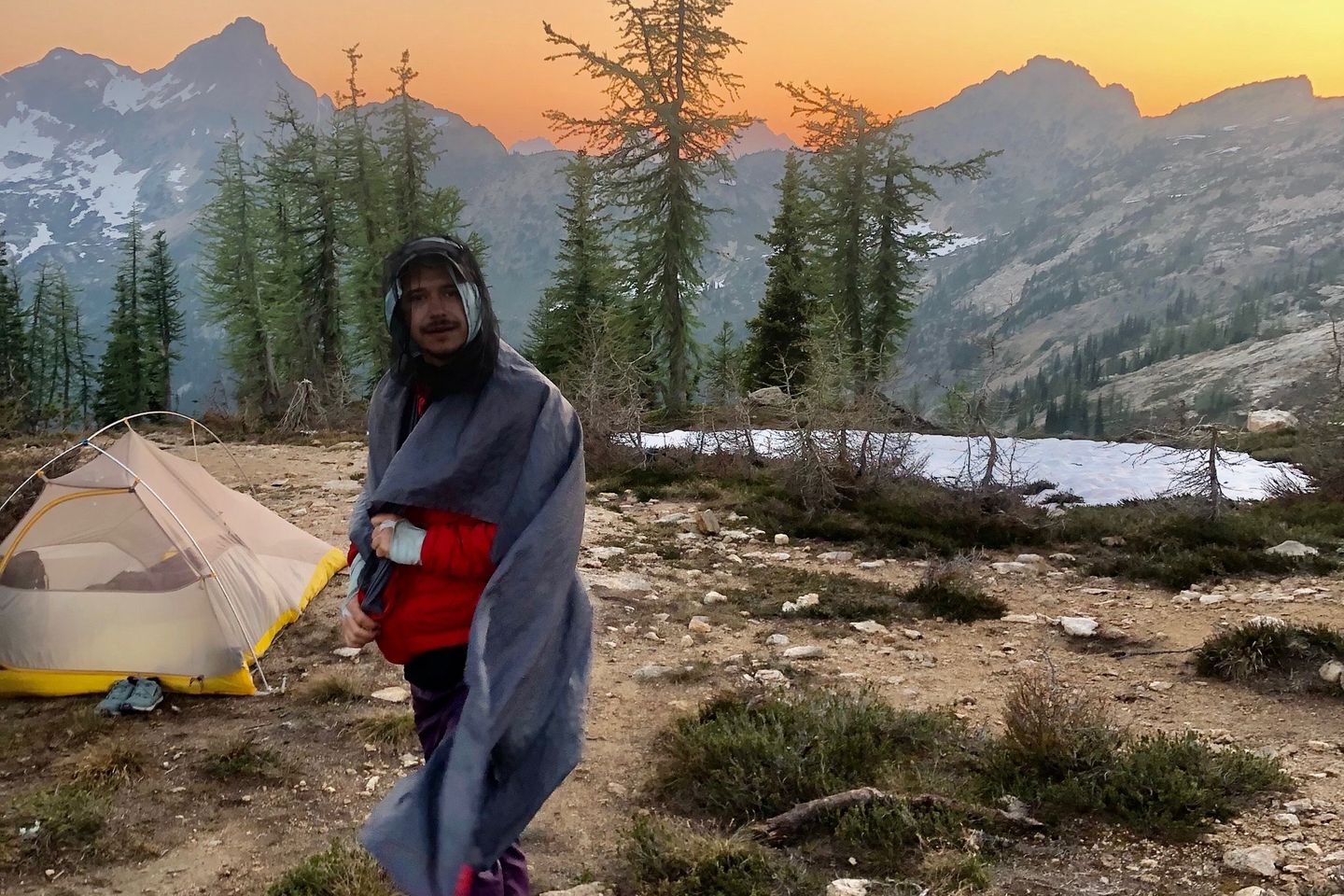 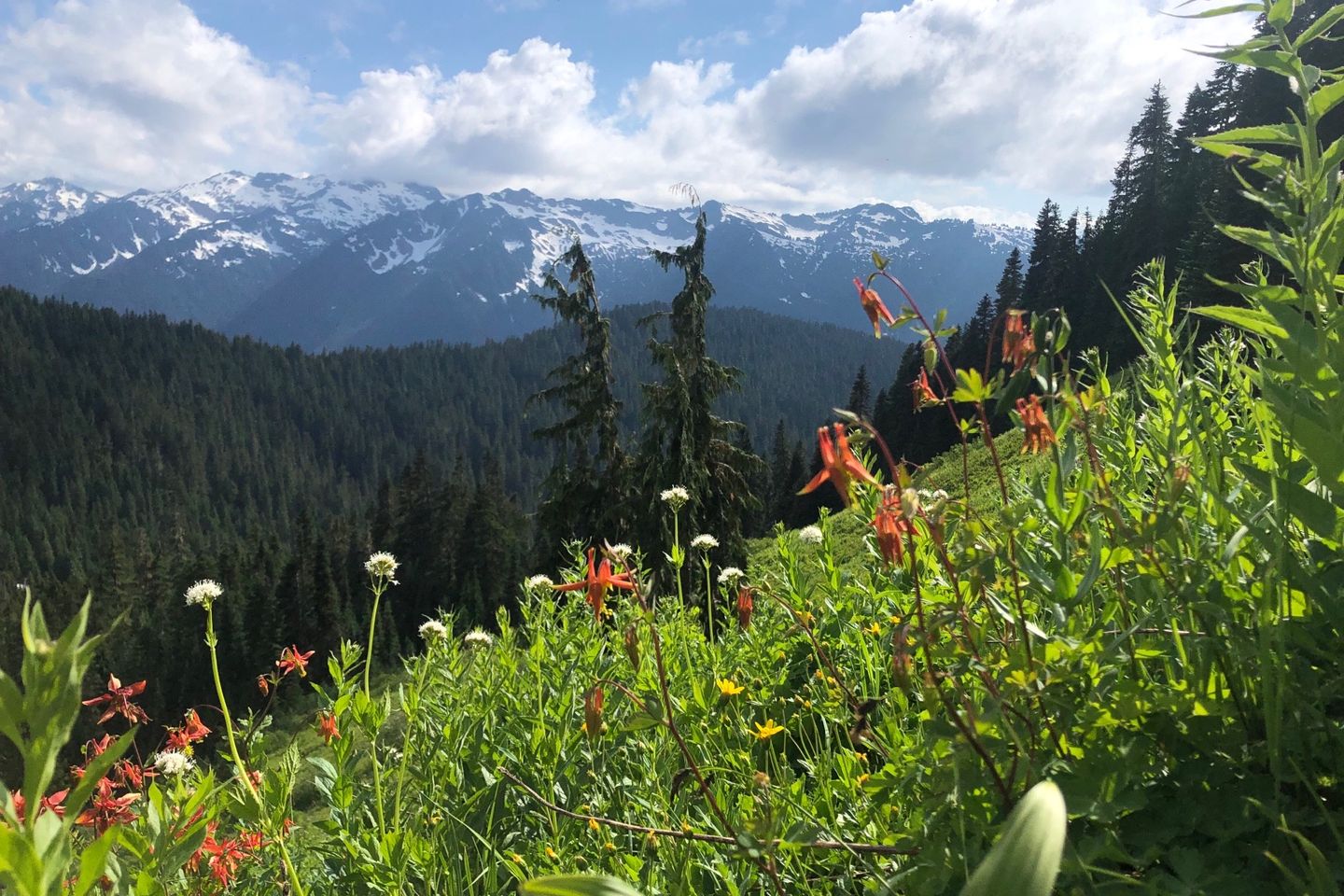 I can not think of many more groups of people in my life that can create space in their lives to reconnect for a two week backpacking trip, but we sure as hell did it, even if it got a little wonky. When we were thruhiking in 2019, we ended up calling ourselves the “Ain’t No Might” crew, for reasons I will have to share another day. It is absolutely beautiful to be reunited with them all.

Toes, I have been hiking with since the beginning of course. That feels the same, but still different. We still cut up and crack jokes and act half our age constantly, but it feels to me that we are both a bit more focused/invested in this hike. Maybe there are better words or ways to say it. If so, I will think of it.

Pale Ale, Mange, and Wizard all hopped on trail with us at Harts Pass. I got to see Pale Ale in city girl vibe, but seeing them all in their hiking outfits did something to me.

Mange giggles just as much. Wizard is constantly full of surprises. Pale Ale can still get me laughing harder than anyone when she gets in her moods. But there is change. It has been a long year for everyone, but I think my friends Mange and Wizard have had an especially rough one. Conversations with Wiz about sweet baby Mabel while numbing our feet in the freezing river after a long day are new, and while those talks can feel as icy as the river, it is so damn good to be out here with them and I hope for nothing but peace for them both. I love you Mange and Wizard.

Being the last one out of camp and spending most of my morning playing catch up was simply how I moved through life every day on the AT. We camped at Cutthroat Pass a couple of nights from Stehekin and it was literally both the highest elevation and most beautiful campsite I have ever slept at. Hiking to catch them in the dawn air vibrating with the sound of mosquitoes, I put my music in and played an old playlist while practically running down the trail. I became overwhelmed. I have put so much work, and made so many sacrifices, and I am actually out here. Such a rewarding feeling.

Moose, Twirl, Pancake, Craig, Wallflower, Danceparty, Second, Spud, Bunkhouse, B-Shwack, Juicy, Crunch, Mistake, and Relay are just some of the folks who are also on the trail, and it has been great getting to know new friends. I have been entertaining myself by putting everyone into “classes” of fantasy characters. Or DND archetypes kinda thing.

I have struggled with technology. Guthooks, the primary map used by myself and most thru hikers, has not worked well pretty much since the beginning. To be fair, I have not been anywhere with good enough internet to try to do much. Toes has struggle with gear but altogether doing well despite it. We are learning.

This is not like the AT in many ways, but one that has become glaringly apparent is the lack of shelters. Not just the shelters as in the structure themselves, but also just how they are so useful. This is where we would naturally reconvene after getting split up. Shelters are great for breaks. But most importantly, I miss the shelter logs. It is nice to see who is ahead of you and what has been going on with the trail. Likewise, they are useful for leaving messages for the folks behind you. I have resorted to writing time stamps in the dirt, or on a leaf stuck somewhere hopefully obvious. Additionally, most days getting to the shelter was the final goal of the day that I could set my mind to when I am wearing down. The PCT is was less forgiving. You never know where exactly you are going to be able to camp. A large chunk of the aready established camp sites are under snow. Or blocked by fallen trees after a couple of years of no trail maintenance. Yesterday, we hyped ourselves up to do what we thought was going to be one more mile. Then the campsite and the area all around it was destroyed by a fairly new landslide. So, we kept heading south. That’s the only thing to do.

The trail itself is spectacular. Between the wildflowers, the snow, and the sharp peaks of mountains rising in the distance I am completely enraptured. I have learned so much about hiking across snow. My asana practice came in handy when navigating blow downs and avalanche debris. My legs are all cut up, everything itches, and I already cannot smell myself which is a bad sign for everyone else. But, I’m thriving. Yesterday we hiked 26 miles so that we would have a short 3 miles to the road crossing at Stevens Pass, and hopped in the back of a truck almost immediately. This community is amazing.

I love it. I am loving every minute of it. I feel so much stronger in many different ways than I did at the beginning of the AT. Physically, mentally, emotionally, and spiritually stronger. This trail is mind blowing. I keep using the word “exponential.” From one ridge line to the next, the mountains rise in jagged peaks that fade into the distance. Today, Mount Rainier loomed mighty behind them all.

Tomorrow will be two full weeks of hiking. I’m excited for the weeks to come, and want to savor every single one.