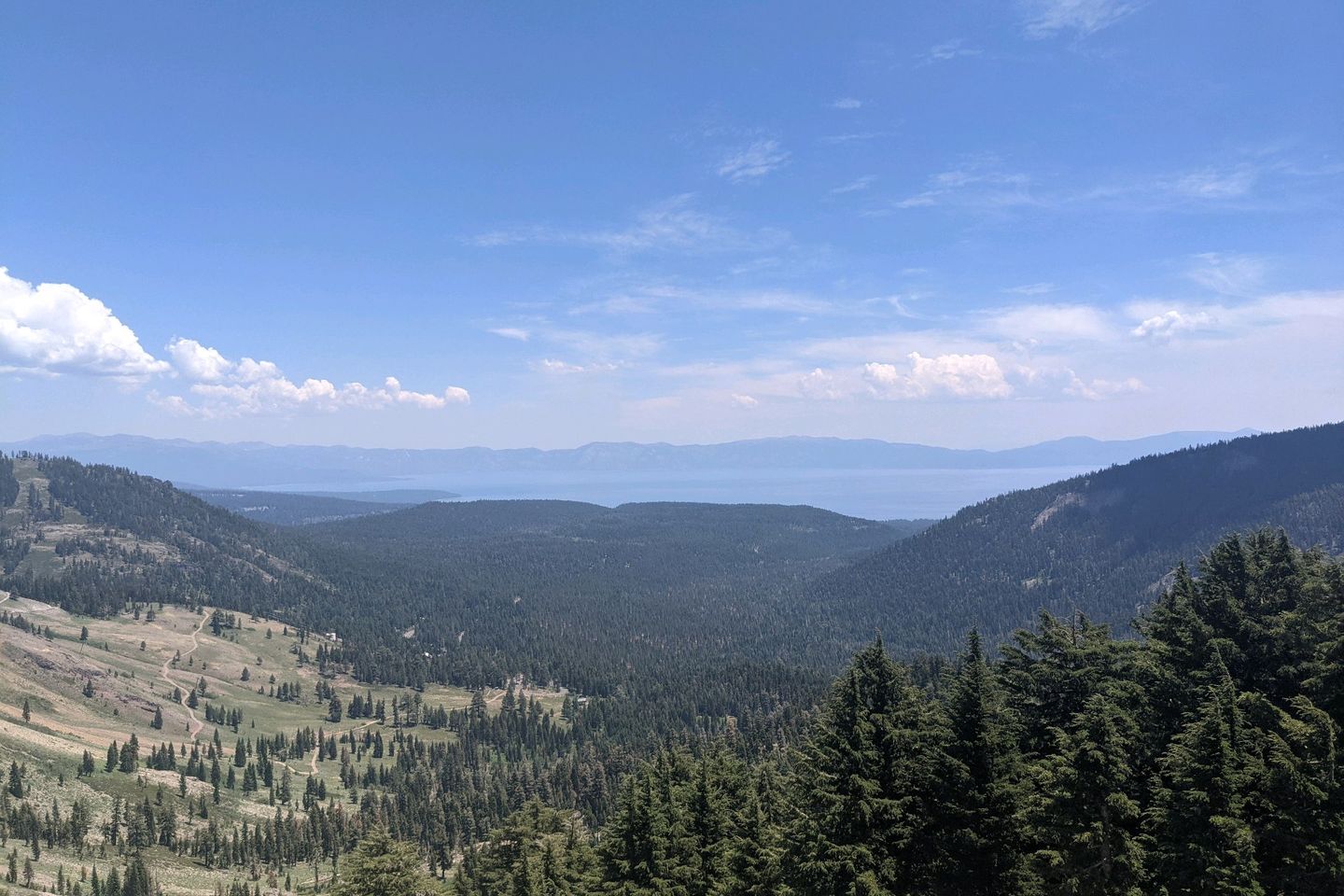 Okay, folks, time to mix things up! I have NOT been doing a good job of keeping up the daily posting (obviously) so I'm going to try to give the readers of this blog (both of you!) a more near-real-time experience by uploading one post per segment (from town-stop to town-stop) and see how that goes.

So, that means a lot fewer posts overall (and fewer pix), but more timeliness and, hopefully, better quality which, let's face it, this blog definitely needs!

Also, I'm leaping ahead in time to the present, although I will go back and fill in the gaps between Day 56 and Day 74 later because my public demands it. Well, at least my friend Becky's mom has demanded it.

The beginning of this post finds us in South Lake Tahoe, which is a fun but overpriced stop along the PCT, shortly before the 4th of July holiday is about to begin. We have all survived the Sierra, Yosemite National Park, (unforgettable...we should all get together and go there someday) and the amazing "Low Sierra" that settles toward the enormous Lake Tahoe, at the low, low altitude of 6,225 feet--the first time we have been at an altitude this low in weeks.

South Lake Tahoe is about to get even more packed with people who have just been released from COVID-house-arrest by the tyrant Gavin Newsom, and motel room prices are shooting through the roof! This is definitely no place for a nice Lutheran boy, so time to hit the road....er, Trail

Today (2 July) it's just Anchor and me. Colonel Sanders got a head start last night. Baewatch is staying behind to meet his lovely significant-other who is arriving from the East Coast, and Catch is a day or so behind.

Still, things begin fairly promisingly, with manicured trails and gentle ascents near this tourist spot. The lake itself is gorgeous! But there is a sign that does say "Desolation--3 miles," and that should tell you something.

Yes, we're going into the Desolation Wilderness, and, yes, the first 15 miles are miserable. The nice, gentle trail surfaces are suddenly littered with fist-sized rocks, and the climbs become markedly steeper. Both of these things slow us down (although Anchor is a much stronger hiker than I am so she is still way out in front) which is terrible because the mosquitoes are thicker in the nap on a Persian carpet, and the slower we go, the easier it is to drink my blood. It's a horror show. Oh, and it's hotter than blue blazes too.

Given our late start, we didn't expect to make big miles today, but, seriously, we did not make big miles today. I don't arrive at our planned camp until 2115, well after dark (which I dislike), and Anchor is nowhere to be found. I assume she has moved on further, and I just throw down my stuff on the ground to cowboy camp. I go to sleep in a sweaty, stinky funk.

So this segment is off to a great start.

At least I slept pretty well, and things look a bit better when I set off around 0500. I have no firm idea of where Anchor is, but I plan to hike about 25 miles today (Saturday) and, hopefully, catch up with her.

Before long, I pass out of the Desolation Wilderness, without even seeing a Rodent of Unusual Size, and the terrain does ease up a bit. The climbs and descents are a bit easier, though there are still a lot of them, there are a lot fewer rocks, and there's a little bit more shade.

This is also where you can start to see the terrain changing significantly from the Sierra range--influenced predominantly by tectonics and glaciation--to a lower, rounder set of mountains which have been formed mainly by ancient volcanic activity. A glance backward from a high-spot reveals the serrated High Sierra to our south and that serves to make the difference even more obvious.

Saturday (3 July) is another hot day, but I do generally make better progress than yesterday. I have my lunch on a high saddle overlooking Lake Tahoe and linger much longer than I normally would, such is the beauty of the view.

The afternoon is a hot slog, relieved only by Anchor's surprise appearance from behind me. All day long, I had assumed she was ahead of me. Turns out, she camped before me last night, and we have been headed for the same spot all day. Of course, she caught up to me and passed me going away, about 2 miles before we got to camp.

Tonight, on the night before Independence Day, we are camped on the banks of the American River, which is fitting. Under threat of thunder storms, Arthur and I retire to our tent to watch the movie "1776" which is our annual tradition, even on the Trail (I had it preloaded on my phone). Stories that I was heard snoring through much of the movie are a pack of lies spread by my enemies.

The 4th of July was another hot one. I made good time out of camp in the morning. Lots of ups and downs, but mostly downs because we are headed for Donner Pass for lunch. Yes, that Donner Pass. The one where the ill-fated Donner Party became snowbound during a pioneering wagon trek westward in 1846 and may (or may not...stories differ) have resorted to cannibalism to survive until spring.

I just have a big burger and a salad at the Donner Summit Ranch, along with Anchor who has, once again, caught up with me and passed. So, I was passed at the Pass.

After lunch, Anchor is off well ahead of me, and, truth be told, I'm not feeling all that great. The burger is sitting like a chunk of lead in my gut, and the temperatures are broiling.

Shortly after I pass though a couple of creepy tunnels under I-80, I run into a pair of older ladies (even older than me) who are a bit lost. They ask for directions, which I give them, and then one of them looks at me and asks, "Can you show us?"

You have no idea how much I want to say no.

Sometimes I hate myself.

I certainly hope this helps me get into heaven because by now I am hot as hell, and I have almost 19 miles to go to get to camp. I can't drink enough water to slake my thirst if I stop at every stream I pass, which I do.

I was kind of grumpy for the rest of the afternoon--no way to be on Independence Day.

I dragged into camp around 1845, looking like a bunch of wilted dandelions, but we were camped next to White Rock Creek so at least I was able to get my feet into some cold, flowing water which does wonders for my disposition.

Before heading into our tents, Anchor and I discuss our progress. We have done almost 150 miles this week, and that's exactly where we want to be.

There was almost nothing remarkable about Monday, 5 July, except that Anchor did not pass me. Sure, I practically ran 25 miles, and I barely stopped for lunch or any other breaks, and she was closing in on me at the end, but she didn't pass me!

At the end of the day, we are just a few miles from the town of Sierra City, our next town-stop for supplies so the morning will be pretty easy.

And, indeed it is. We're both out of camp at 0530, and we make it to California Highway 49 before 0700. A timely hitch puts us in town just a few minutes later, but we discover that the one real breakfast place in this tiny, 200-person town is closed on Tuesdays. Really. Tuesdays.

But we do find some coffee, wait for the General Store in town to open, and get our resupply done. Colonel Sanders also comes into town while we are resupplying (we passed him while he was in the town of Truckee for a zero). He's heading back out this afternoon so he can meet his wife in the town of Quincy for a couple of days this week.

Anchor and I find a nice place to stay for the night in the home of a local lady who rents rooms to hikers and other visitors, and that's where we are now. Had a great dinner at a restaurant that has Taco Tuesday, which almost makes up for the breakfast place being closed this morning when we got to town

Headed back onto the Trail tomorroe, for what will probably be a full week, on the way through some hot, rugged territory, on the way to Chester CA, which is probably the next time I will check in.

Leave your questions, suggestions, and Donner Party jokes in the comment section.

Sea Otter Fact of the Post: Under regulations of the U.S. Fish and Wildlife Service, "Alaska Natives (Indians, Aleuts, and Eskimos) who reside in Alaska and who dwell on the coast of the North Pacific Ocean or the Arctic Ocean may harvest sea otters for subsistence purposes or the creation and sale of Native articles of handicraft or clothing if the harvest is not wasteful." These are the only U.S. persons allowed to hunt sea otters.

Thank you Elf and Jean (and Leo, of course)!

I just want to say hello from WDC! Leo says Good Job! (We agree.) Hang in there!! Love—JCLM