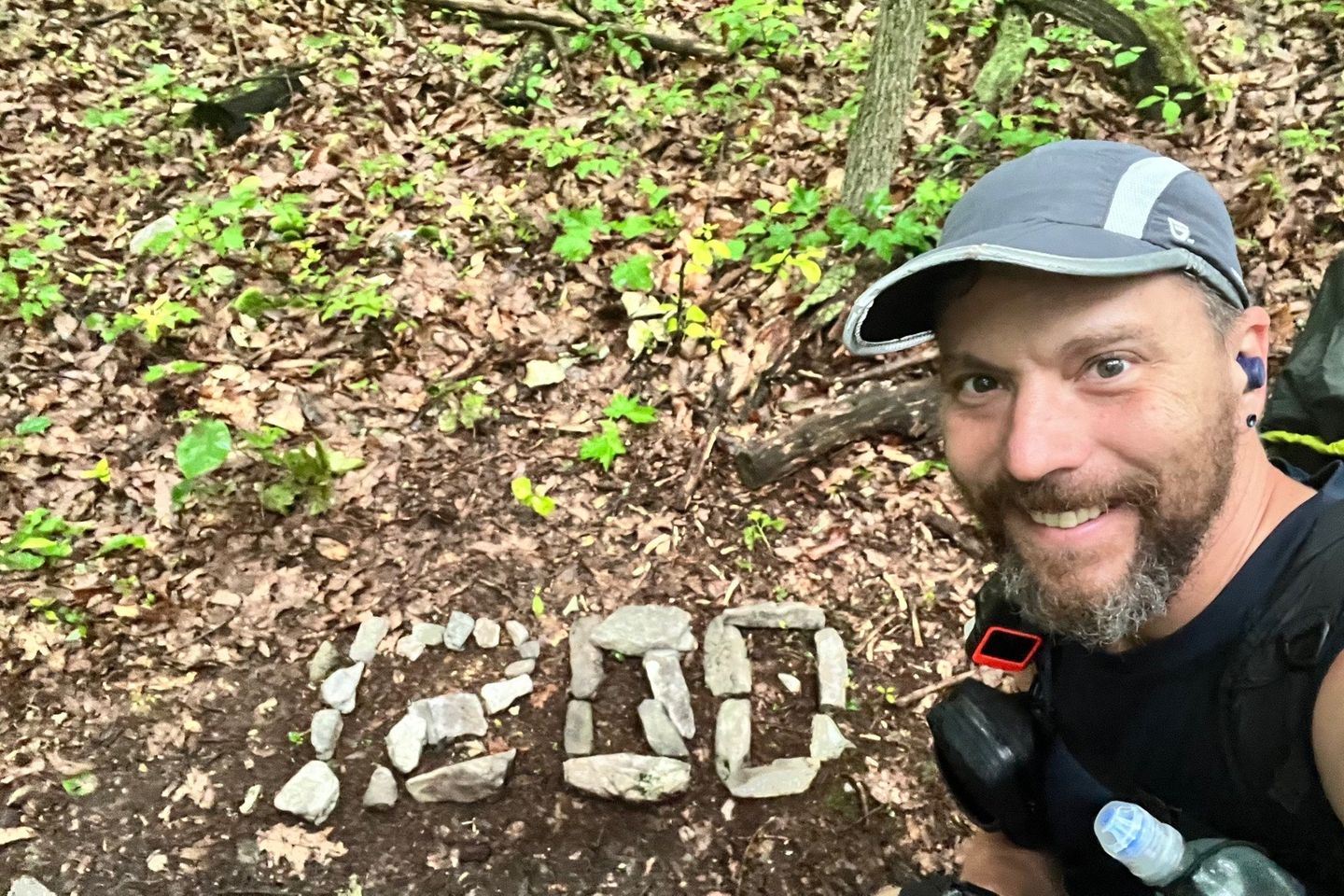 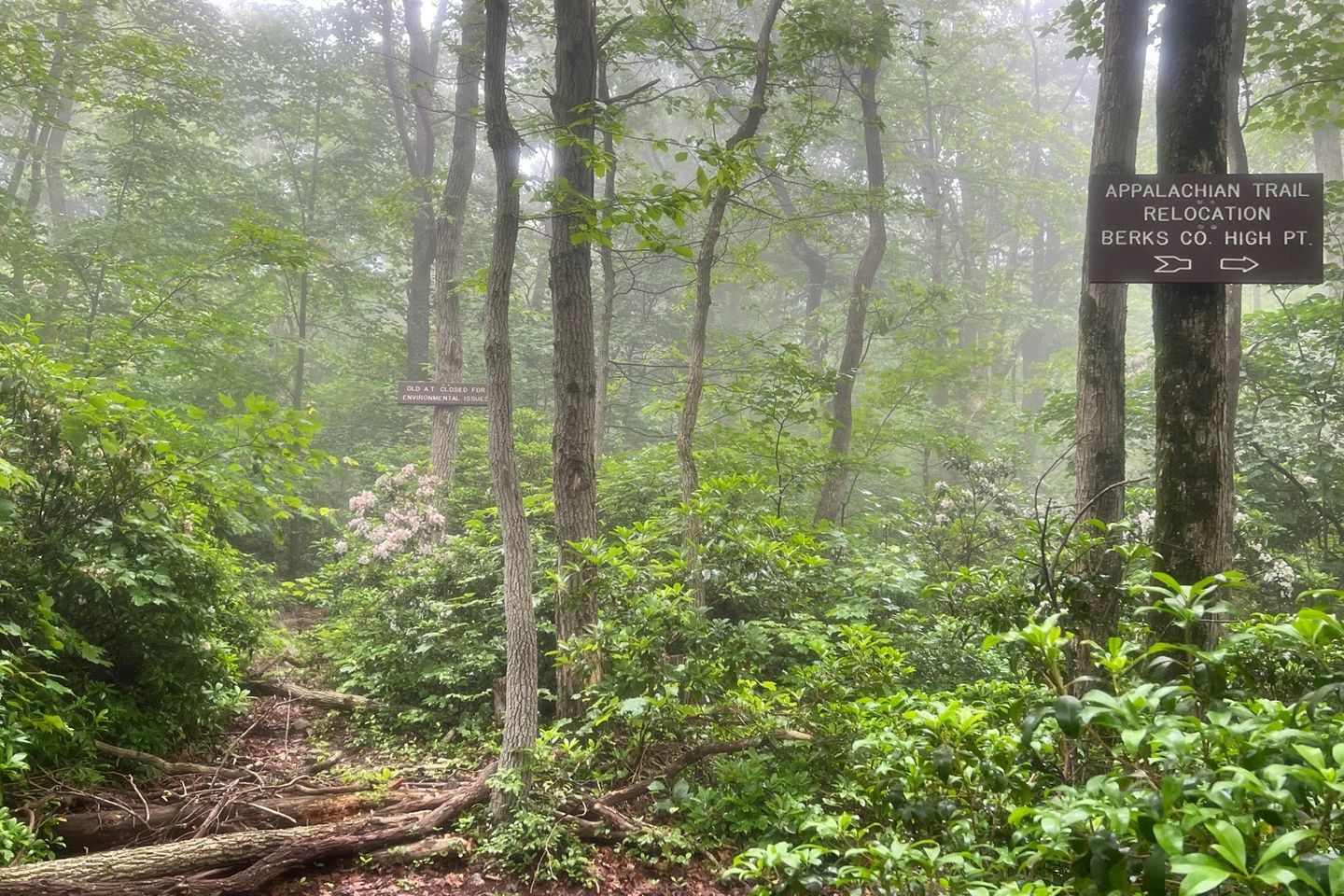 Worst day EVER! It started to rain around 4:40 AM. I knew there was a good chance it would. That’s why I put my tent up under a cluster of trees so I had extra protection from the canopy of leaves up above. That can help soften heavy rain so it has less of a chance to “splash back” under my vestibule doors and into the tent. Due to the rain, I was late getting my hike started. I had a 19.5 mile day planned so it was going to be a late one now. I came across a bunch of rocks set to make “1,200” and realized I hit the 1,200 mile mark. That was cool! Except sometime after that I realized my GPS tracking had stopped after 2.9 miles. That’s what makes my Relive videos! I don’t know how much time I missed and if it missed the section where I hit 1,200 miles. I won’t know for a while as I’m trying hard to conserve battery power as I push to meet friends on the 15th. I had to start a second track for the day. That always throws me off. Looking at my watch and seeing a lower mileage than I know I did makes me feel like I’m walking forever and barely getting anywhere. I know that’s not true but I just felt sluggish. Add on to that the wet air from the rain, the thick slippery mud and the sharp, pointy, ankle-breaking rocks and I felt even worse with a back that just doesn’t want to carry a pack anymore as it’s in major pain and feet that feel like mince meat. I was feeling miserable. I realized I was falling into a negative mood and it’s easy to happen out here and hard to stop. I just felt like I didn’t want to do this anymore. I came across trail magic that I had to walk .3 miles off trail to get to (and .3 back) but I went because I felt I really needed it. It did help but then the worst happen shortly after I got back on trail. I hit a section of boulders and stepped on one that teetered, throwing me off balance. It was either fall flat on my face on the rocks or jam my trekking poles down to brace myself. That’s what I did and I watched in slow motion as my left trekking pole just went SNAP! I broke about 5 inches off the bottom of my pole! I have a tent that relies on the trekking poles to hold it up! I had to try and fix this! I used all my duct tape to try and piece the broken part back on but that didn’t hold. I pushed on to camp, passing site after site with no one in any of them so I was feeling good my planned site would also be empty. Ha! Tough luck! There seems to be a sick homeless lady here in her tent trying to tell me her son just left visiting. She is going to section hike part of the AT but since she doesn’t feel good, she’ll stay at this site until Thursday. (What? It’s Sunday!) She was trying to light a fire and asking if I had any weed. That’s when the sky opened up and heavy rain started in an instant! Are you kidding me? I quickly threw my tent on the ground, staked the corners, and put the good trekking pole on one side to hold half the tent up, tossed all my things into the tent. I was trying to re-tape the broken trekking pole with the last of my tenacious tape but as that got wet with the sudden rain. I now have nothing to try and hold the broken part on. I simply put the broken pole up to hold the tent, dropped the other pole to match the height and got the tent up as best as I could. It’s way too low and sagging but I’m in it and out of the rain. I will have to manage for 2 1/2 days until I get picked up by friends and I already ordered new trekking poles to be shipped to their place. Sigh! What a horrible day! I am writing this in my sagging tent under my quilt. I haven’t eaten dinner. I’m hungry, tired and I can feel water spray coming in my tent because I cannot pitch it tall enough. It’s going to be a long night! I won’t quit but I’m being tested.