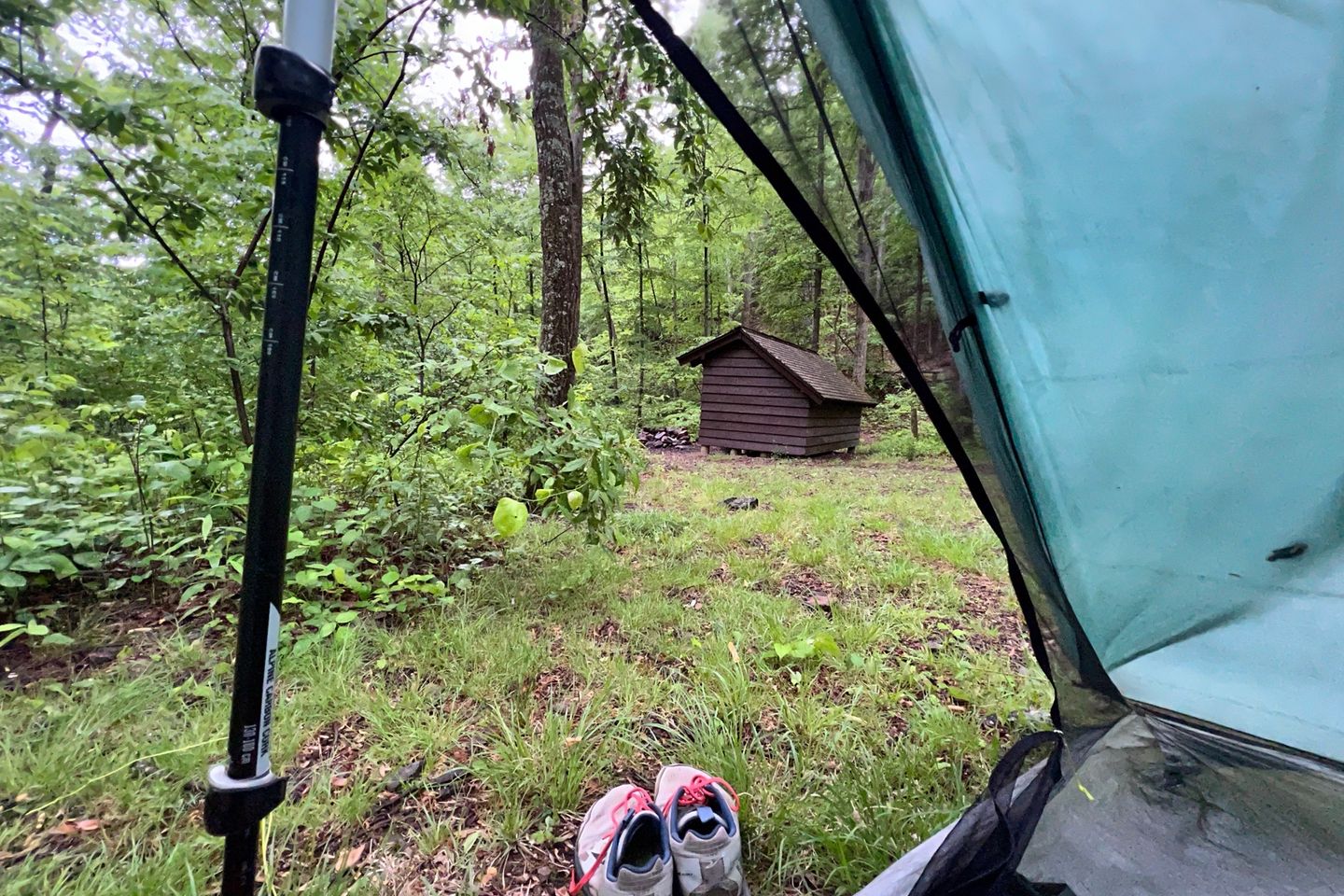 Today started with around a 2,000 ft climb it is the gate. After that, it was a good day of hiking. Nothing too bad. If there’s one thing about hiking this trail that might make me got freaking crazy, it’s the webs. You cannot see the strings made across the trail, but after the 4th or 5th time your face goes through one, you too will freak out like I do flailing your arms in the air all over in front of you while yelling profanities. It’s called Silk Blazing and it sucks. The webs across the trail, be it from spiders or from silkworms dangling in front of you, were really bad that last two days. I’m always happy to see someone walking southbound past me because hopefully they already cleared the webs up ahead for me.

I also hit the 800 mile mark today. Someone made an 800 on the ground using pine cones with a stick smiley face. Cute!

I had kept my pack cover on all day waiting for the on and off rain like yesterday but it didn’t happen. It was actually a REALLY nice day starting a bit foggy and cloudy in the beginning and then some sunshine. As for wildlife, I first saw a cute little rabbit and seemed curious about me but was still trying to blend in to the bushes while watching me. I unfortunately spooked it when trying to get my phone out to take a picture. The other was a nice sized black snake on a suspension walkway. It was first going out toward the middle until I tapped my trekking poles trying to spook it and make it slither off faster. Instead, it turned and started coming towards me and where I had tapped my poles. Made for a good picture and video but it wasn’t helping my need to get by it and over the bridge. Once it was to the side and its head moved down like it was looking under the bridge, I slipped by quickly.

The Brown Mountain Creek Shelter is right after a large rushing creek and is mostly on a sharp slant. The tent spots near it are before the rushing creek and then two more spots on the other side below the shelter, which is higher up. It’s my opinion these camp spots are WAY too close to the water but I don’t want to continue on so I put my tent up in the flattest spot I could find; one of the two on the shelter side. Being so close to this much rushing water, I’m expecting serious condensation on my tent but it’s still wet anyway from last night’s rain.

Okay, so a change of plans. I’m not going to hike 18+ miles to the Montebello Camping & General Store. I am going to hike just shy of the road that takes me there and camp. That way, the next day I can do a nero there and have plenty of time to eat, resupply, get cleaned up and charge my battery banks. Depending on how fast I can get that all done, I could go back on trail and stop camp further down the trail. I’ll weigh my options when I get to Montebello and see how nice the campsite is and how much they charge. If I nero and stay there, it just mean I won’t get to Waynesboro until the 19th. My new shoes and smaller hip belt is waiting for me there and I’m looking forward to getting them.