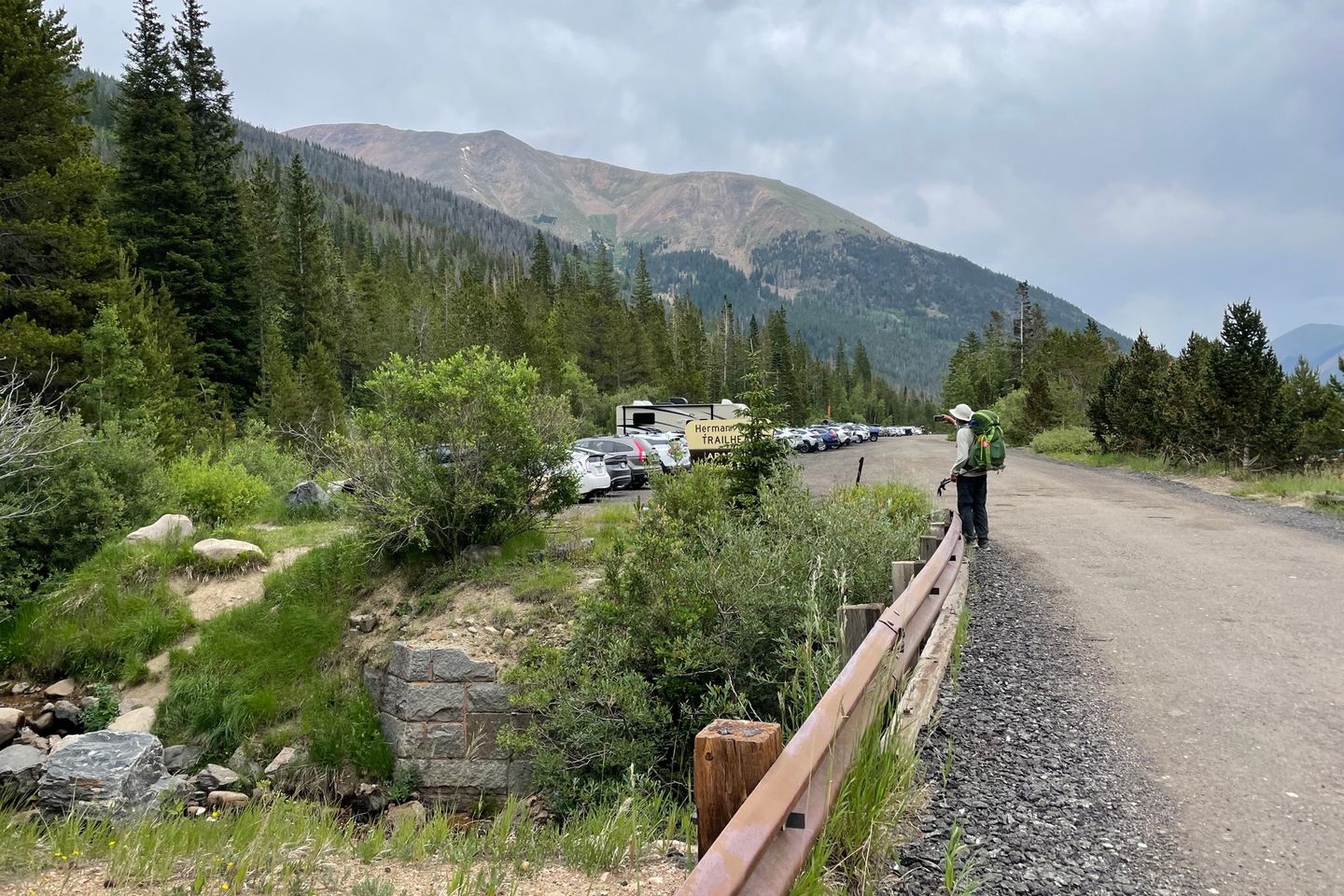 Traffic started early up the dirt road next to our campsite to Gray’s Peak trailhead. Some are looking to summit for sunrise, others just to get done before afternoon storms.

The trail followed the dirt road to Interstate 70, then paralleled it as a very nice paved bicycle path for several miles. We didn’t see any bikes during our hike, but it made for fast hiking. The weather was cloudy with a high overcast and cool, just right for hiking. In true CDT fashion, we almost missed where the trail diverged from the bike path. There was no official marker, just a faint path and an arrow made of sticks a previous hiker had made. I had counted on filling up at a water source marked on Guthook before crossing I-70, but that didn’t work out. The creek was deep in a 25 foot ravine and would have required some mountain goat skills to get to. At least there was a nice bridge across it.

We crossed under I-70 to the Herman Gulch Trailhead. The parking lot was packed. This is another vey popular trail locally that allows an out-n-back hike up to an alpine lake above treeline. (Side note: I have been impressed by the number of people in Colorado getting out and using their trails. People of all ages.) With all the people, we inevitably get asked where we started or where we are going. It’s really fun to say “New Mexico” and “Canada” and get into a conversation.

The CDT follows the Herman Gulch Trail for several miles before branching off again on its own. It follows a creek initially, so we were able to fill up on water. Again, the CDT wasn’t marked when it diverted from the trail — at all this time. We missed it and hiked (uphill !) about .1 miles before realizing our mistake. Even for the CDT this was unusual. There is usually a post or a CDT marker on a tree after a junction just to let you know you are on the right path. This time only a narrow path through some willow bushes. Frustrating.

We were quickly above tee line at this point. It is fun to top a saddle or pass or come around a corner and be able to the trail ahead for long distances sometimes. We ate lunch in a saddle, with still overcast skies and a chilly breeze.

To set up what happens next, I want to remind you how Just Jim and I ‘hike together’. It doesn’t mean we hike right next to each other all the time. He hikes faster than me generally, but especially in climbs and descents in the afternoons. So we set locations to meet up on breaks, usually based on mileage on Guthook. So this afternoon, Just Jim pulled out in front of me, as is normal. As the afternoon wore on, I could see the overcast turning into rain and dark clouds on nearby ridge lines and peaks. About 4:00, it started to rain on me some, along with a little sleet. It was enough to stop and put on my rain gear, including my rarely used rain pants. I got a view of Just Jim ahead of me doing the same. No big deal, and even with the occasional sleet and light winds, I stayed warm just from the exertion of moving.

Then some thunder nearby. Not good. Thunderstorms are always troublesome when hiking, but especially above tree line on a ridge line. The wind picked up just as I descended slightly into a wide saddle. Looking around, I noticed the dark clouds on a peak to my left were now lower and had white ‘fingers’ extending below them heading my way. It looked ominous. Since I was in a relative low spot I decided to set up my tent to weather it out. As I was putting in the tent stakes, the first wind gusts hit. Three of the four stakes pulled out as I grabbed the tent so it wouldn’t blow away. I tried again as the rain intensity picked up but got the same results. Very bad. It was all I could do to hang on to the tent in the now strong wind. I remembered something I had seen online and just wrapped my self and my pack with the tent and sat down. For the next hour the storm continued this way. Even laying down on the ground wrapped up in the tent, the wind would nearly rip it away from me. Scary. Then I started shivering. OK. That meant my hiking was over for the day and I needed to get warm. Fortunately, the wind started becoming intermittent. I picked one lull to quickly set up my tent. Boy was it nice to get out of the rain and wind and into a dry sleeping bag. It was even nicer to get a hot meal in me. I received messages from Just Jim he had also set up about a half mile ahead when he also had gotten to shivering. We were both OK. Scary, but all was OK. I plan on getting up early to go meet Just Jim to get to town together tomorrow (Winter Park via Berthoud Pass).