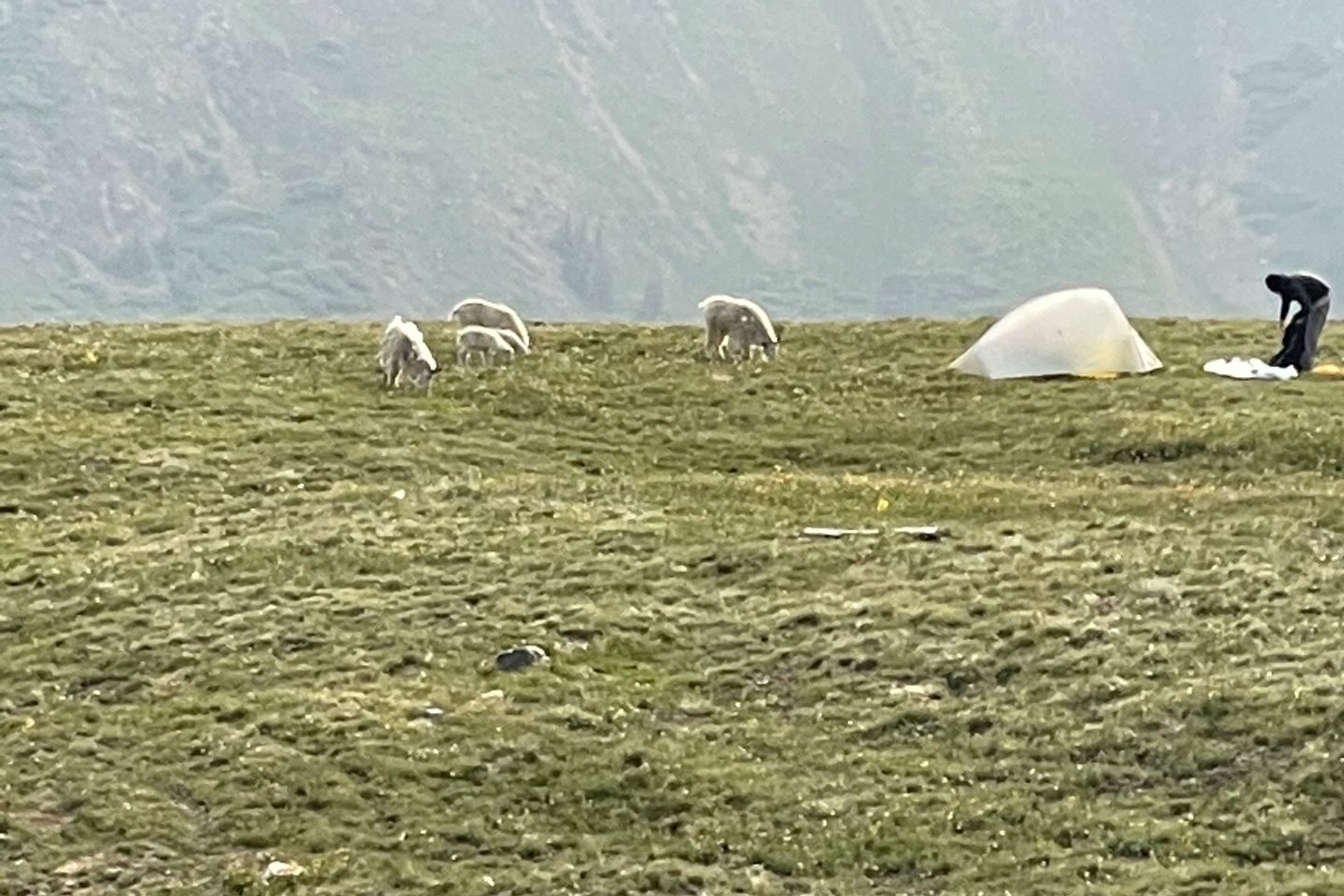 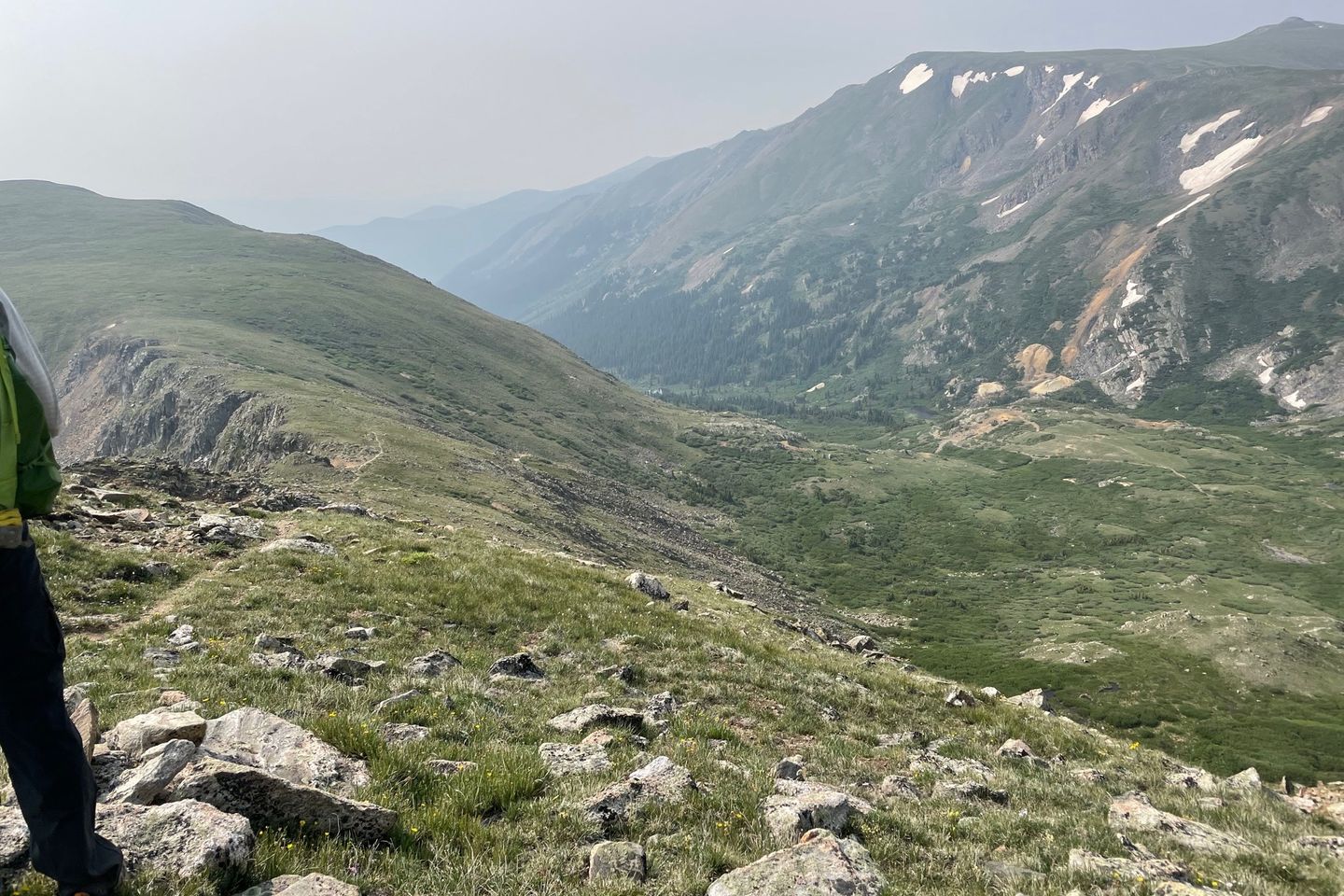 It didn’t reach freezing this morning but was still brisk. The views both this morning and throughout the day were hazy due to forest fire smoke. Still good views, but just not the same. We spent the whole day above tree line until our final descent to our campsite. Other than the haze, the weather was great.

The trail in the other hand was not marked well and sometimes seemed to disappear into the alpine tundra. Mostly it was not a big deal because the general idea was to follow along the current ridge line. But that still leaves room for some decision making and leads to more time spent making corrections.

“Follow a ridge line” doesn’t adequately describe the experience. There are constant ups and downs for example, and most of those (in this section) did not have switchbacks. Sometimes the trail would traverse the sides of steep slopes and sometimes follow a rocky Jeep trail. Both Just Jim and I wondered why this section wasn’t talked about more. It wasn’t overwhelming but deserves more credit for the effort required. The overall effect was that the mileage came slower than expected. It was good we had planned for roughly 15 miles today!

A new animal sighting today; Rocky Mountain goats. I had been looking forward to this. We saw our first ones at our first water source for the day. They had been hanging around the campsite of some other CDT hikers all night. They came over and checked out Just Jim and I as we filtered water. They would approach closely and then act like we weren’t there.

Later in the day, the trail was along a ’knife edge’ for short distances.This is where two high points are connected by a thin, rocky ridge. The trail might be right on the top of the rocks, or slightly off to one side. What makes them exciting is that the drop offs on either side are dramatic. Once you do several, they are not as dangerous as they first appear. But that doesn’t keep you from gasping if you stumble a little while crossing them.

Even with all this, we had been anticipating what would be our final descent of the day. Guthook had a warning symbol at that point indicating a dangerous traverse. Other hiker comments indicated there was no trail at all there. Hikers were just coming up with their own initial ways down the very steep descent.

The idea was to join an old mining road part way down and then follow it. We elected to use one hiker’s recommendations. His recommended path started down earlier than others. Initially his path worked as it was mostly on steep grassy slope. (Ouch! I was using muscles I hadn’t used in a long time, even after all this walking. My old knees hurt.) But his path recommended turning left part way down. But turning left would put us into a rocky gorge. And the grassy slope turned into a short cliff leading down to a stream. We thought we were stuck. But then Just Jim noticed a small cairn nearby. On investigation it was next to a narrow rocky chute that lead down to the stream. Seemed OK, and we obviously survived, but it wasn’t fun or safe. The chute had lots of loose rock in it. We discovered we could easily create mini rock slides down it, even with careful step placement. Just Jim got caught in his own mini slide that made it look like he was skiing in the rocks and gravel. Toward the bottom of the chute were larger, but still loose rocks. Both of us took several falls on the way diwn. The bad news was this path did not lead us to the road. But the good news was that the stream led to the road further down the canyon; we simply had to follow the stream.

We then followed the road to an area to find a campsite, which also set us up for the climb to Gray’s Peak tomorrow. Both of our legs and knees were sore from the sketchy descent, but it’s just part of the hike.

Great pictures Shawn. If you're tired of dehydrated foods, it looks like that goat is ready for the BBQ. But as my SERE instructor repeatedly said: "you just have to know who's going to put the thump on who."

I must admit I get lost in ‘problems of the moment’ sometimes, but when I pause a moment and look around me or reflect on the day, I can’t believe I am doing this and how lucky I am.

I hope you are savoring every minute of your journey… the real world is far less scenic and exciting. I enjoy your posts and the small thumbnail pics. Thanks! And great job!