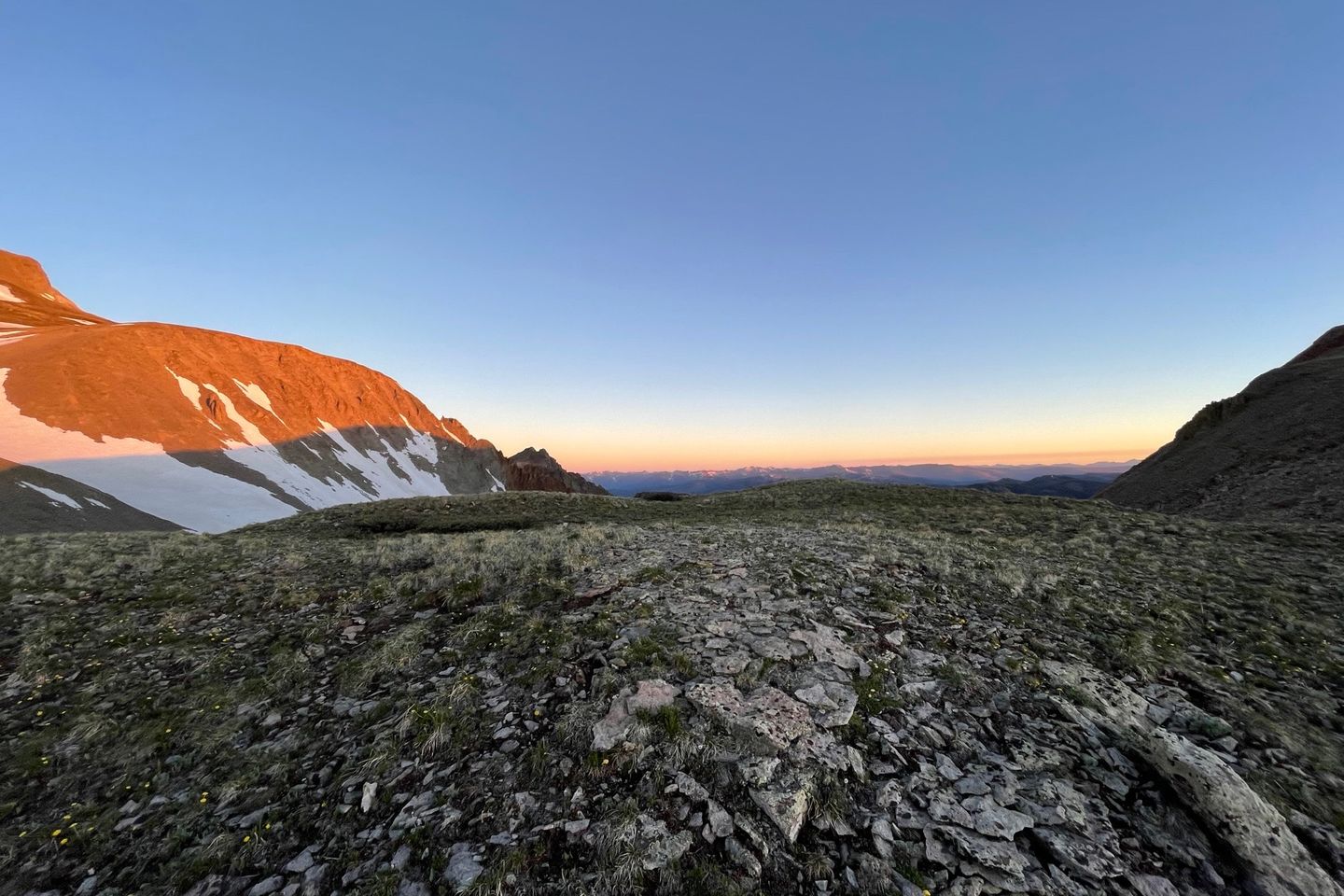 A much better day!

I got going early, worried about getting miles in. I actually passed the hikers who had camped past me as they were breaking camp. Initially there were some large snowfields to cross, but they were flat or lightly sloped and still crusted over from the night cold. The trail followed around a peak and descended into Elwood Pass. The trail more and more looked like, well, trail! There were occasional snow drifts in the trees, but no steep traverses. Yeah! At midday with my pace, it was feasible I could reach Wolf Creek Pass by sunset.

One striking thing about a lot of the trail today was that it was a narrow path cut into the side of a steep slope, both dirt and rock. We had not seen much of that so far, but had miles of it today. It appears dangerous at first but you quickly adapt. It is annoying though because you have to pay constant attention to your footing. No looking at scenery unless you are stopped. And if you need something out of your pack, you have to wait for a wider spot. There are spots where erosion has cut into the trail that require extra attention. Don’t look mom!

The final part of the trail before Wolf Creek Pass brings you up to the top of Wolf Creek ski area. This part slowed me down more than expected. First, there were a lot of blowdowns; a lot. Each one is unique on how you get around, over, under etc. Second, the ski area boasts it gets the most snow of any ski area in Colorado. Guess what that means? Though no traverses, there were a lot of large snow drifts in the trail. By the late afternoon they were slushy and no fun to climb over. My hopes were dashed of reaching the Highway by sunset. Instead I set my sights on a mention of a ‘warming hut’ near the top of one of the ski lifts.

The ‘warming hut’ was unlocked (though with a sign that said ‘Authorized Personnel Only’). It was small and was being used to store odds and-ends from the ski area, like the rescue sleds. But there was a table, chairs, and room on the floor. Perfect. Home for the night. And with a great 270 degree view with the windows. The only problem was water. I had failed to collect enough water to camp that night. I collected some snow from a nearby drift to melt and boil with my stove. Town day was tomorrow so fuel wasn’t a concern. Comfy place to stay.

Side note regarding feet: The last couple of days have been rough on my feet. I (and 99.3% of other thru hikers) wear trail runners. (Not here to argue the merits, just stating a fact.) That means cold, wet feet nearly all day long in these conditions. Either from the snow when walking in it or the snow melt boggy areas or water (and mud). Trust me, it is unavoidable. I and some other hikers try waterproof socks in these conditions. Yes, they keep your feet dry but really help more to keep them warmer. But they have a downside; they hold in your sweat. So unless you are often walking in wet and cold, they are not good. Today showed that. The afternoon trail was mostly snow free (until the end). I felt my feet getting too warm and switched back to normal socks, only to need the waterproof again at the end. You just can’t win.