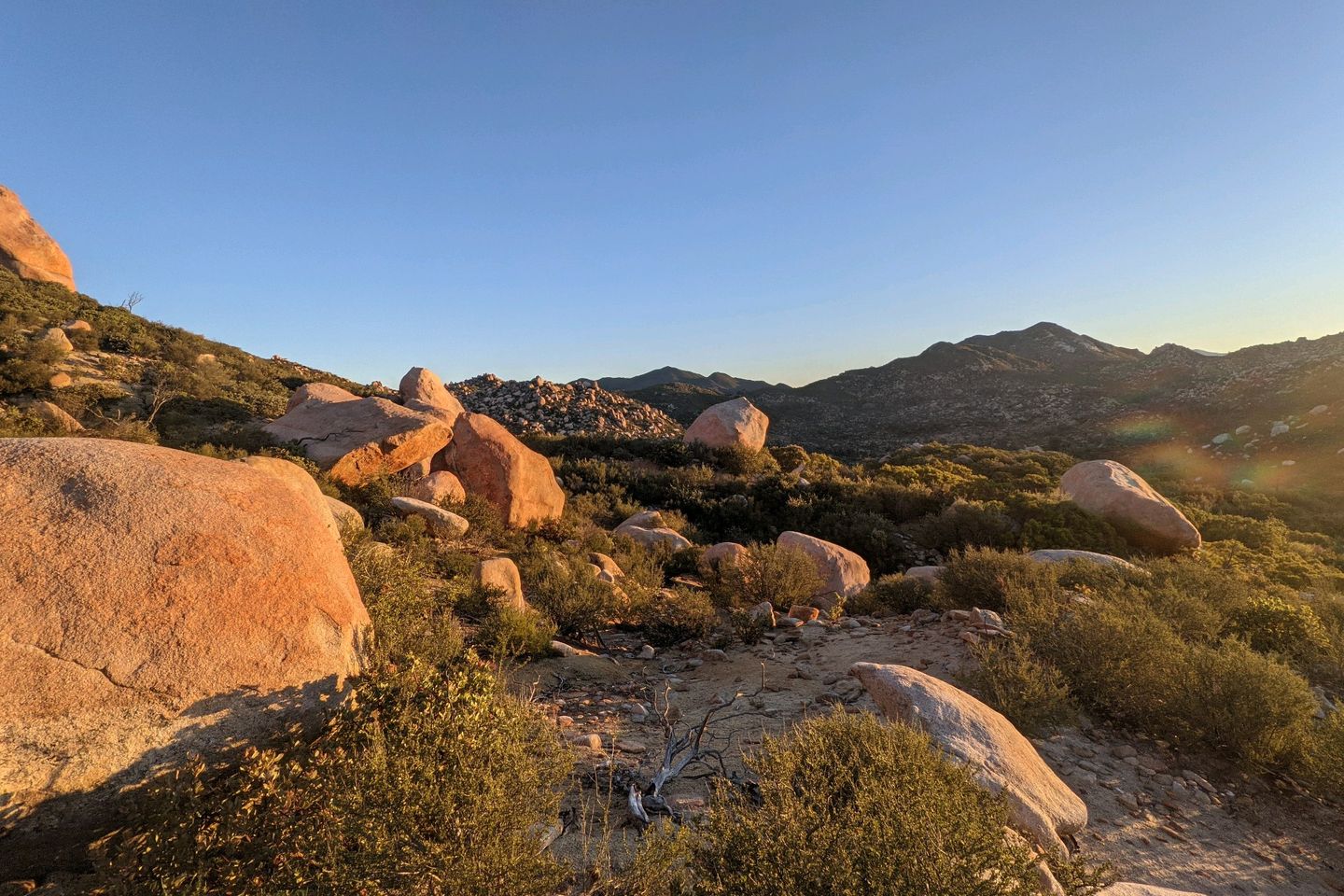 Before hitting the sack last night, I managed to set up an AirBnB, via the AirBnB app, in Idyllwild for me and the Ambassadors, hoping we will intersect in town.

I know what you are thinking: using an app on my cell phone to set up an AirBnB doesn't sound like much of a wilderness experience, but that's where you are wrong. I mean, I only had ONE bar of LTE connectivity, people! That's barely a step up from 3G! It doesn't get a more primitive than that.

Anyway, pretty good sleep last night, and I'm up and on the Trail by 0600, having already eaten down my food supply by a pound and a half. Yay!

Lots of ups and downs this morning, but it's still cool, and I make it to my first stop, about 3.7 miles from my camp site, with a half liter of water to spare. This spot is called Mike's Place, and it's a big water tank just about 0.1 miles off the PCT. Mike, the caretaker, maintains this water cache, high up in the mountains, pretty much at his own expense. He does have a contribution box, and I toss in a couple of bucks, but there's no way it covers his time and expenses. Mike has a house nearby, where he feeds hikers and allows them to stay (the food, in particular, gets great reviews), but I don't trek down to the house.

Thank you, Mike, for all you do to support hikers in this section!

Moving on, I can tell that it will, in fact, be a hot day today. The front that came through yesterday was definitely the leading edge of high pressure. The Trail may be going up and down, but the temperatures are only going up. No clouds. No shade.

As warm as it is, I make pretty good progress, and, by 1215, I make an additional 9+ miles and arrive at the junction with a side trail to Tule Spring. There's not a ton of shade (but a little) so I drop my pack, grab a couple of water bottles, and make my way down a steep, rocky trail to the spring, which is flowing slowly. It's pretty shallow (may dry up in the next couple weeks) and the water smells strongly of sulphur, but it doesn't matter. Going to need the water.

Back up top, I'm joined by a mother-daughter hiking team and Bear Slayer (one of the really good hikers who passed me late yesterday). Bear Slayer stayed at Mike's Place last night and validates the hospitality reviews.

We chat, all huddled into the small pool of shade provided by a couple of chaparral bushes, while we eat our lunches and drink sulphur-water.

I'm embarrassed to say that my lunch break spread out from my normal half an hour to about an hour and a half. I really was not looking forward to more climbing in the heat. But I finally put my big-boy hiking shorts on again and get after it.

It is, by now, sweltering.

This is the perfect time for me to test my sunbrella, strapping it to the left strap of my backpack. So for the first 3 1/2 hours of my afternoon hike, I try to make it work, but I can't. The sunbrella definitely keeps me cooler, but it sits so low that it restricts my view, especially when climbing (which is most of the time today). It is frequently grabbed by vegetation on the side of the footpath too. Worst of all the shaft runs up behind my left ear and whacks me in the noggin with every other step. I mean, getting bopped in the head certainly won't hurt my intellect, but bashing a groove into my skull isn't going to do anything for my good looks.

By 1700 or so, it's cooling off enough that I can take down the sunbrella and stow it, never to be deployed again.

After a half an hour, I make it to Mary's Water Tank, another trail angel-maintained water cache, complete with sun awning, picnic tables, a trash can, and even a Tiny Library. Eight or nine hikers are sitting at the picnic tables, joking, laughing, eating, and planning how much further they were going today and tomorrow.

I, on the other hand, knew exactly how much further I was going: zero miles. I was staying right here.

As I cold-soaked my dinner, the other, younger hikers all drifted out, headed for camp sites a few miles further along or even, for the really ambitious, the Paradise Valley Cafe about 6 miles up.

I'm alone for a while, and I decide that, having experimented with the sunbrella today, I'll experiment with cowboy camping (no tent) tonight. There's no risk of rain, and I can roll out my ground sheet, inflatable mattress pad, and quilt under the awning.

Just at sundown, I'm joined by one other tired hiker, but I want to make an early start, and I'm under the quilt pretty early.

Sea Otter Fact of the Day: The southern sea otter was considered extinct by the early 1900s, a victim of the fur trade. However, a raft of about 50 remained in the waters near Bixby, California and protected by the local residents. The current southern sea otter population is entirely descended from that small raft and owes its existence to forward-thinking Bixby-ites.