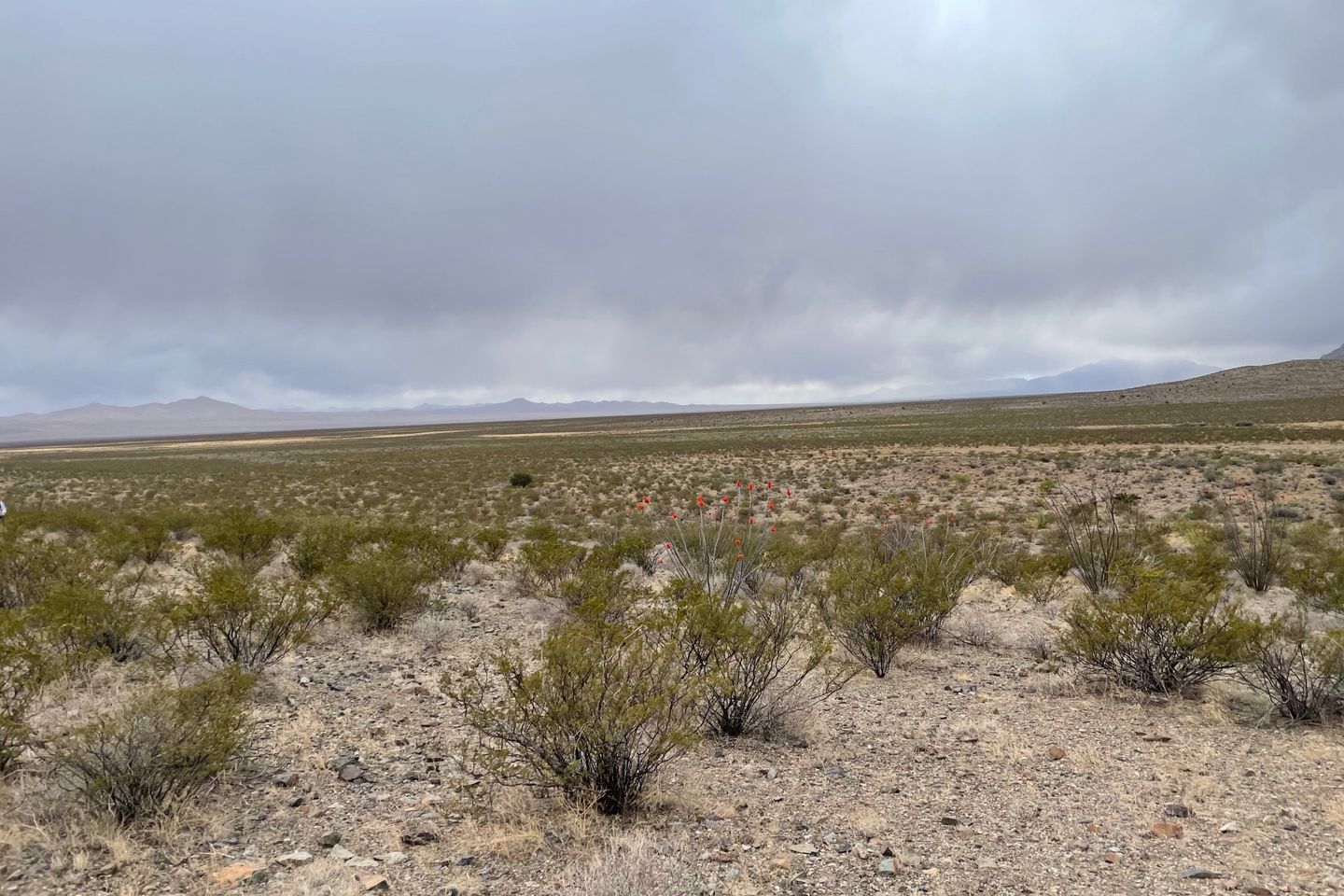 Despite the light rain both when I went to sleep and just as I woke up, not much rain actually fell during the night. The ground was just damp as I crawled out. But, there were dark clouds just to the west and the forecast called for possible rain. So I hurried through breakfast and packed up. Just in time; a light but steady rain started as I put on my pack. Since it looked like it would pass quickly I used my umbrella and wore a light wind jacket. (Even ‘breathable’ rain jackets can get sweaty very quickly when hiking.) it was enough. About a mile into the trail I saw Roadkill just starting to hike. Despite not seeing any hikers the day before, we had camped within a mile of each other. He had a goal of a water tank/well just short of 20 miles down trail. That sounded good to me. We both had plans to stop at the next water source about 8 miles ahead as well.

The rain stopped not long after, but with more dark clouds to the west. With the morning sun shining back on them we got a beautiful rainbow. We came upon two women hikers packing up who started the same day as us, Abigail and Kitty. Though they hiked faster than me while on trail, they had taken longer breaks and stopped sooner in the day. We all decided to try for the same camp spot that night. Though I passed them as they finished packing, they passed me as I took my first break later.

It is really amazing how much the terrain, plants, and geology can change over short distances in the hike. It is interesting if you pay attention.

I got to the water tank behind the others. One of the annoying things about hiking is having to pack up wet gear, which we all had to do with our tents this morning to get going. When you do, the plan is to unpack it during the day to dry it out. When I arrived at the tank, they had their tents draped over posts and fences flapping in the wind. I did the same. It didn’t take long in a dry New Mexico wind to dry out, and was a good chance to take a longer snack break. As we were there a herd of cows approached expecting to get their drinks as well. They were obviously annoyed at finding us there with tents snapping around in the breeze. Two were brave enough to approach one spot to drink, but the rest waited until we left. (Thank you to the rancher providing an easy to reach and use spigot with instructions for us humans! It was great water straight from the well.)

Not many pictures for the next couple of hours due to stormy weather. Roadkill and I were hiking near each other as the wind picked up and a storm approached. There had been rain storms in the distance around us but now one nearby. It looked like we would be in the midst of it, but we lucked out and just had to deal with the edge of it. That still meant sideways ‘stinging rain’ (Forrest Gump reference) for about 20 minutes, enough to drive some rain behind my wrap-around sunglasses. Ouch. There was no lightning so to keep warm the best thing was to keep moving.

The rest of the day storms threatened but stayed away from us, execept for some wind gusts. Good water sources were more common, including another water cache. Making the planned distance looked good. The trail took a more westbound turn in the afternoon into some high hills. With storm clouds to the west it was beautiful. With our different hiking speeds we were separated at this point. I got into a head low just-keep hiking mode at some point and realized I could make 20 miles for the day. What I failed to realize was that would put me past the planned stopping point about a mile. Well - stupid me blew past the water tank we had planned to stop at, just looking at my mileage and trying to beat a storm bearing down. As I stopped and looked at Guthook I discovered my error, about a half mile late. I quickly turned around, hoping to beat the rain back to our campsite. Almost...... Just as I got there, it started raining heavy. All I could do was hunker down with my rain gear on and umbrella out, hoping it wouldn’t get too muddy for setting up. All I could do was laugh at my ego getting me in the situation. Though the rain was heavy, it didn’t last long so it wasn’t too bad. Oh well. It turns out the others hadn’t set up before the rain hit either, so fun for all of us. Luckily no more rain that night and a light breeze means a dry tent in the morning.

Will you post a picture of your tent set-up? Also, what snacks did you pack? -Lindsey