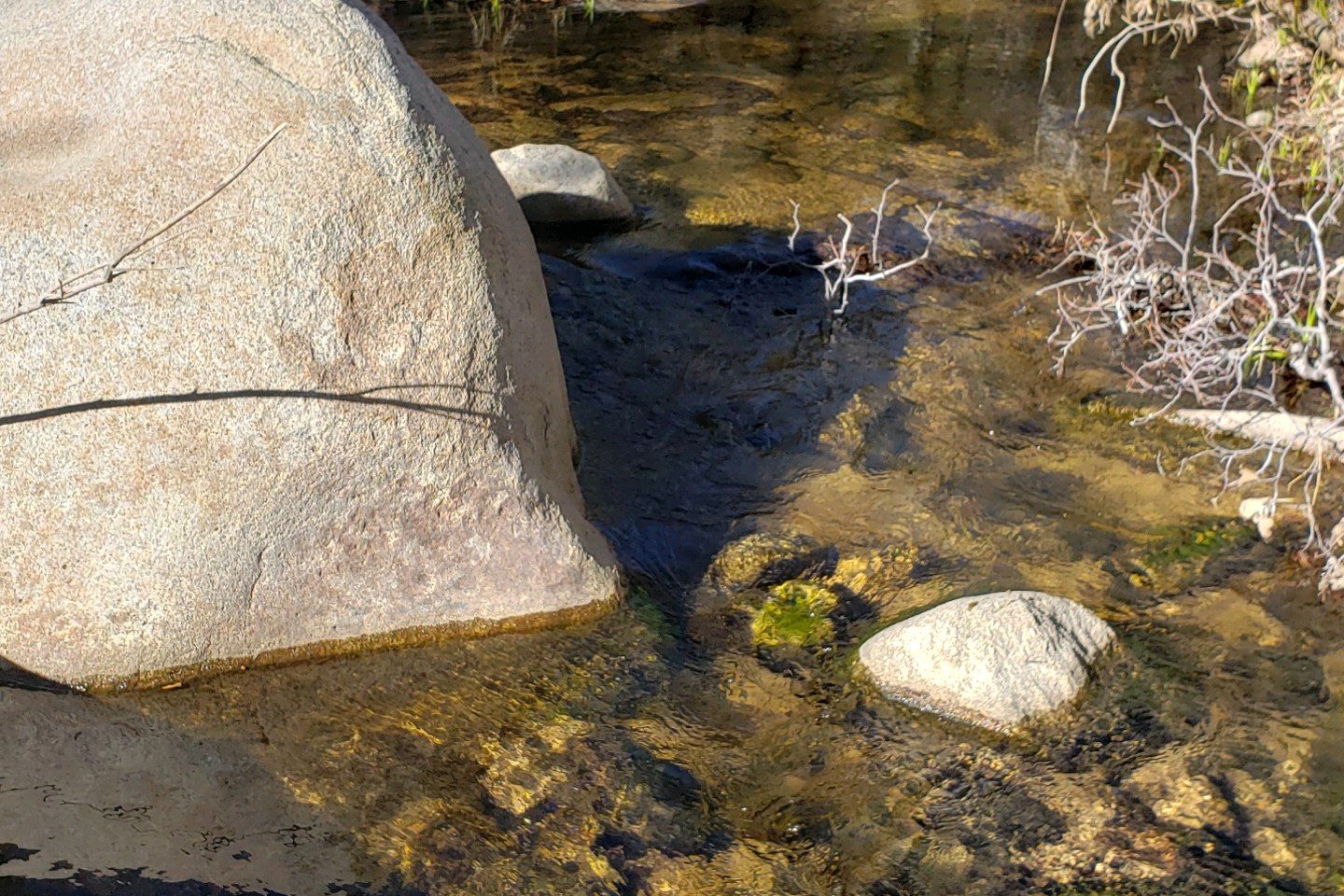 I did 19 PCT miles and 2 non PCT miles. We zinged when we shouldnhabe sagged. O well. This has been the most beautiful day of the journey so far. Went from pine forest, to desert super similar to Joshua tree, big bolders and such, back to forest and then the final 5 miles was along the Holcomb stream, that is 15 feet wide in some places. It felt so nice soaking my feet at the end of the day. So I come to this stream, its about 5pm I still have 4 more miles to go but I need water for camp. I start to fill up bottles to filter and this young (25 maybe) guy comes along. Nice guy. We start chatting. He then strip down to his hiking shorts and starts looking for a place to get into the stream. Im only half way thru filtering water and he walks UP stream, not down, and wades in. Im thinking, dude, im filtering here. He then finds a pool big enough the he dunks his whole self and proceeds to chit chat with me about mother earth and being at one with her. Ok there are alot of these types walking the PCT, flower children are the best way I can describe them. They are super easy to get along with. I decide not to point out to this man child than he's creating sweaty hiker marinade about 10 feet up stream from where I'm preparing my drinking water. I just continued to chat with him, picked up my bottles and went up stream about 10 ft from him. Oh and the water was like 50 degrees so how he stayed in that stream up to his shoulders is beyond me. I asked him if he was cold after maybe 10 mins and he said not now, now I'm numb. Im releasing toxins from my body from the rigors of hiking. (Ya dude, and those toxins would be in my drinking water, but anyway).
I'm camped at mile 294. This is where the seirra sisters and I agreed to camp. Ive been here for about 90 mins and they still haven't shown up. The man child said they were a little over a mile behind him and that was 4 miles ago so I know they were ok up until that point. Not really worried about them but it would be nice if one of them had an Inreach. But neither does so im left with just hoping they got tired and decided to do less miles. My legs and feet are dead tired and it was a long 21 mile day.
Tonight I had chicken flavored ramon with green onions, mushrooms and Spinach that I added. It tastes yummy. Disappointed the Spinach isn't going to last longer but its already starting to wilt. I'll prob eat some for breakfast tomorrow and get rid of the rest as its going bad fast. Onions and mushrooms are holding up well. Had such an amazing time at the Shades. It was like spending time with a favorite aunt and uncle, which is super weird as we were never close. Its just nice having a shared history with people. Not to mention what great hosts they were.this PCT experience has been so much more than I ever expected it would be.